2,000 lanterns light up VivoCity's Sky Park for the Mid-Autumn Festival 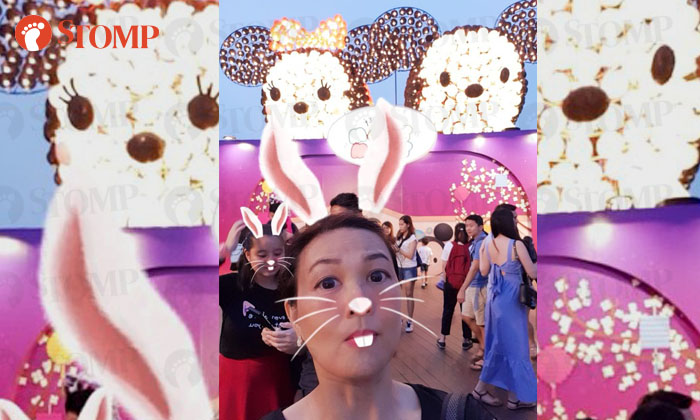 Stomper Lil was at VivoCity's Sky Park on Saturday evening with her friends.

She decided to view over 2,000 Tsum Tsum lanterns being displayed for the Mid-Autumn Festival, also known as the Mooncake Festival.

She told Stomp: "I was so happy. I love the lantern and Mooncake Festival."

The Tsum Tsum lanterns come in Disney and Pixar characters like Chip and Dale, Bambi and Dumbo.

They are installed all over VivoCity’s third-level SkyPark.

According to VivoCity's website, the display is split into four parts.

The Wishing Wonderland is located at the water feature area of the SkyPark, where you can see lanterns featuring the “Frozen” sisters Anna and Elsa, along with Sven and Olaf, the snowman.

You can also get a wishing card for S$2 and release a Mid-Autumn Disney Tsum Tsum-themed floating lantern, with 100 per cent of the proceeds donated to the Children’s Cancer Foundation.

Tunnel of Love is a 40m-long tunnel decorated with many Tsum Tsum lanterns of more than 30 Disney and Pixar characters including Nemo from Finding Nemo, Stitch from Lilo & Stitch and Eeyore from Winnie the Pooh.

The Fairytale Garden is where you can see five memorable Disney Princesses including Jasmine, Aladdin and Genie on the magic carpet, as well as Mulan along with Li Shang and Mushu on a Chinese pavilion.

#CoupleGoals features a 10m tall centrepiece of Mickey and Minnie Mouse made out of 1,500 lanterns.

This installation holds a new record in Asia Book of Records as the Largest Lantern Sculpture.

The Tsum Tsum lantern display features will be around until Sep 30.

Related Stories
Stomper shares meaningful song that he created for Singapore's National Day
These breathtaking hotels will give you a serious case of wanderlust
NUS shows off best campus experience to 28,500 visitors at Open Day 2018
More About:
celebration
event
holiday