20-year-old woman's 3 brothers in fight with her BF, 5 men injured and arrested 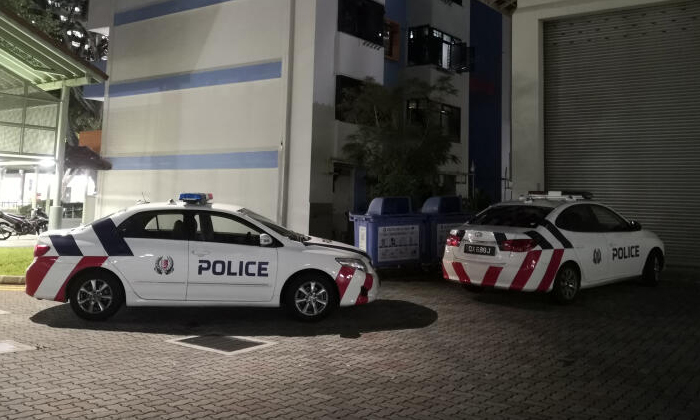 A dispute between five men broke out in a block of flats in Toa Payoh after a group of three brothers confronted their sister's boyfriend.

Their mother was unhappy that their sister had been staying over at her boyfriend's place frequently, Chinese-language newspaper Lianhe Wanbao reported.

The police said yesterday that they were alerted to a case of affray at Block 106 Lorong 1 Toa Payoh last Friday.

Five men aged between 24 and 57 were arrested in relation to the case, and police investigations are ongoing.

Speaking to Wanbao, the sister's boyfriend, 24, whose name was not revealed, said he has been dating the 20-year-old for about three weeks.

Both of them work as food delivery riders, and his girlfriend would usually rest at his home before going back to her home at about midnight.

He said his girlfriend's mother is strict, did not approve of her having a boyfriend, and did not like her coming home late.

He claimed he agreed to have a talk with her three brothers near a staircase at his home.

That is when the fight started, he said.

He claimed they kept pushing him and started shouting at him.

He said at that time, his parents and his younger sister had just reached home and his father tried to stop the three brothers.

According to him, he and his father retaliated as they wanted to defend themselves.

In the end, all five men were injured. And all five were arrested.

His mother, who also spoke to Wanbao, said she had gone out with her husband and daughter to have dinner, and was about to reach home when they heard noises coming from upstairs.

When the lift doors opened, she saw her son fighting with three other men, and her husband went to help her son.

She said: "My daughter and I rushed into the flat to call the police, but later I found out that my neighbour had already called the police after she heard the shouting."

Related Stories
17-year-old girl attacked boyfriend's 60-year-old father with knife
3 arrested for attack on youth who was ambushed while going to meet GF's ex-lover
Man goes to meet girlfriend's ex-lover -- only to be ambushed and attacked by group
More About:
couple
dispute
fight
arrest