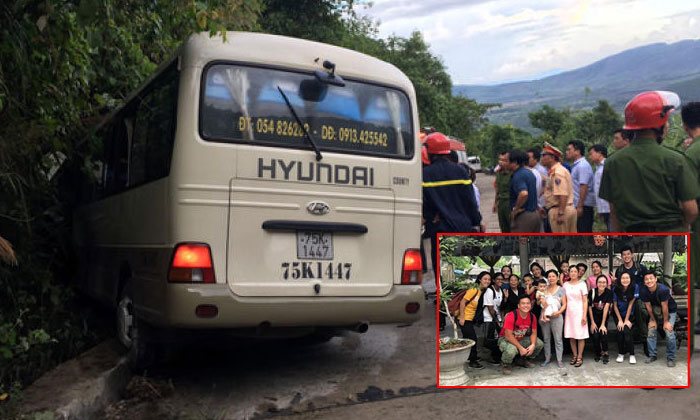 Twenty Singapore Management University (SMU) students who were in Vietnam for an overseas community service project were injured last Saturday (May 11), after the bus they were travelling in hit a road kerb.

The students were part of a group of 30 who were in the central Vietnamese city of Hue for the fourth edition of Project Phoniksa, launched by the university's Rotaract Club.

They were there to do volunteer work at a local kindergarten, including constructing a concrete fence around the compound and teaching conversational English.

They had been in the country since April 28 and completed the project last Thursday.

They were on a recreational programme last Friday and Saturday when the accident happened, SMU said in a statement on Monday.

One of the two buses that were ferrying the group of students had hit a road kerb and all 20 students onboard had been flung off their seats.

The 20 injured students were first taken to a local hospital for treatment. All 30 students later received further assessment and treatment at International Hospital Hue Central.

The students suffered injuries ranging from bruises and abrasions, to more severe ones such as a wrist fracture, a leg fracture and a neck injury, SMU said.

The university added that it activated medical and travel security services company International SOS to provide support on the ground last Saturday evening, soon after it was alerted to the incident.

On Sunday, two SMU employees and a medical team from International SOS flew to Vietnam to assist students directly.

SMU staff in Vietnam are also in touch with the Embassy of Singapore in Vietnam, which has sent two embassy officers to Hue to liaise with the local authorities and render consular assistance to the injured Singaporeans.

Three students who were not hurt returned to Singapore on Sunday evening on their scheduled flight.

The remaining students who were not hurt or those who have been certified fit for travel have chosen to extend their stay in Vietnam to assist and support their peers, SMU said.

SMU added that arrangements are currently being made to fly two students back to Singapore via air ambulance once the local doctors certify that they are fit for travel.

One of the students suffered a neck injury and the other had a leg injury.

Both are fully conscious and in a stable condition.

Professional counsellors from the SMU's Mrs Wong Kwok Leong Student Wellness Centre have met those who have returned, and are on standby to offer counselling support to all students upon their return.

"We will continue to stay in regular contact with our students to monitor their situation," SMU said.

"Their safety remains the university's top priority, and we will provide the best possible assistance to them accordingly."