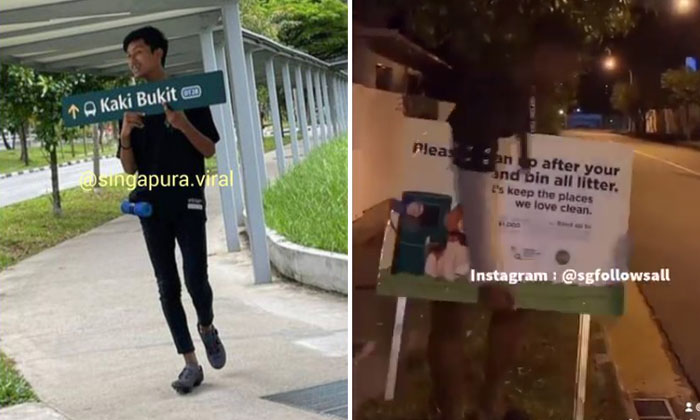 Two teenagers are under investigation for vandalism of government property as part of the 'devious licks' social media challenge.

The challenge originally urged students in the United States to vandalise or steal school property and post their results on social media.

The police said in a statement that they are aware of social media posts circulating online showing the removal of government property by youths.

Two related incidents have been reported to the police and the people involved have been identified.

On Sep 19 at 5.16pm, the police received a report showing an image of a male teenager holding onto a sign of Kaki Bukit MRT Station belonging to the Land Transport Authority.

The photo was posted on various social media platforms.

Police established the identity of the 15-year-old teenager and the sign was recovered from his home.

It was originally mounted onto the frame of the sheltered walkway leading to Kaki Bukit MRT Station.

In a separate incident, the police received a report on Sep 19 at 9.40pm showing a video of a male teenager holding onto a sign belonging to the National Environment Agency.

The said video was posted on TikTok.

The 14-year-old teen has been identified. He had allegedly removed the sign, which was originally affixed into the ground along Jalan Songket, for his video and returned it to its original position after filming.

The police issued a reminder that such acts involving the removal of government property without the written authority of an authorised officer or representative of the government are considered vandalism.

An offender may face up to three years' jail, a fine of up to $2,000, and between three to eight strokes of the cane.

"Members of the public are reminded to abide by our laws, and not to participate in acts or viral online trends that constitute a criminal offence," the police said.

"Those who break the law will be dealt with firmly."

Related Stories
Youth who did a backflip in Singapore Zoo rhino enclosure charged with offences including vandalism
Teen allegedly attacked woman from behind for taking photos of him not wearing mask
Students behind Ngee Ann Poly hazing incident in March punished after disciplinary inquiry
More About:
social media
Youths behaving badly
vandalism
police