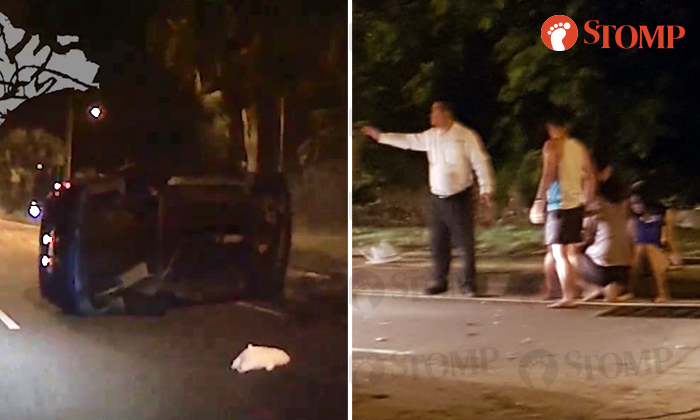 Video footage of a car accident that occurred along Sembawang Road in the early hours of Tuesday (July 23) shows how the Chevrolet ended up lying on its side.

It was earlier reported by Stomp that two female passengers, aged 18 and 20, were taken to Khoo Teck Puat Hospital following the crash at around 12.40am.

Photos taken by Stomper Kelvin show the women sitting by the roadside while surrounded by passers-by who were comforting them.

In a video posted by Facebook page Beh Chia Lor - Singapore Road, the car can be seen skidding onto the central divider.

The car then hit a tree, which caused it to flip and spin on its side before coming to a halt.

It is believed that the car driver had lost control of his vehicle.

According to Shin Min Daily News, three people had climbed onto the car to pull out the two women, one of whom was screaming in pain.