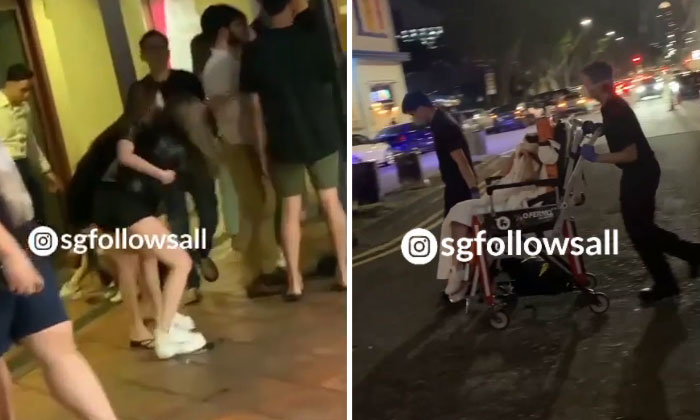 Two women, aged 22 and 27, were arrested after they were involved in a catfight at Prinsep Street on Apr 21.

One of the women was taken to hospital.

A Stomper alerted Stomp to videos of the incident shared by @sgfollowsall on Telegram.

In the videos, the women are seen going at each other as a crowd of people look on.

At the end of one of the videos, a man is seen with a bloody nose as well.

One of the women is later seen being wheeled away on a stretcher.

In response to a Stomp query, the police said they were alerted to the fight at 10.29pm.

"The 27-year-old woman was conscious when conveyed to the hospital," a police spokesman said.

"Both women were subsequently arrested for affray."

Related Stories
Man swings punch at cabby and tries to kick him in Clarke Quay, police investigating
2 men taken to hospital after fight involving chopper in Yishun, including 1 who is arrested
10 men arrested after fight breaks out between 2 groups at Clarke Quay
More About:
fight
catfight
dispute
arrested