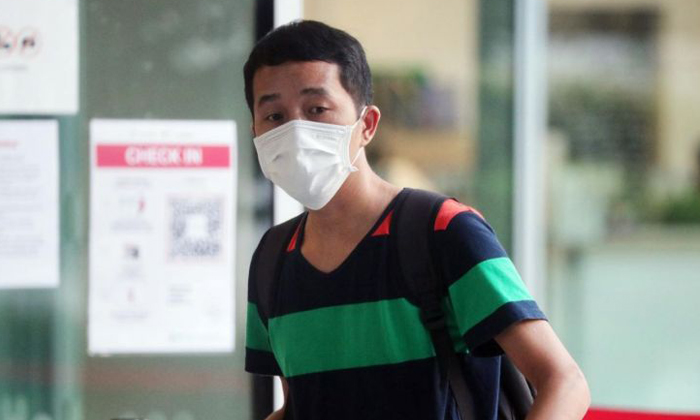 A man who attacked two buses at a Woodlands depot while drunk and caused $6,200 in damages was dealt with in court on Monday (Nov 22).

Chinese national Zhu Honglu, 32, was sentenced to two weeks' jail for an act of mischief. A second charge of causing annoyance in a public place while drunk was taken into consideration.

Deputy Public Prosecutor Hidayat Amir told the court that Zhu, a construction worker, drank seven cans of Heineken beer at home at about 6pm the day before the incident.

On Nov 22 last year, he stood in the middle of the road outside the bus depot in Woodlands Industrial Park at around 1.30am. He saw an SMRT bus returning and started shouting as he ran towards it.

When the driver stopped the bus, Zhu pulled apart the windscreen wiper and knocked on the windscreen, before attempting - but failing - to pull open the bus doors.

He left after some time but attacked a second bus that stopped for him around 20 minutes later.

Zhu shouted at the driver and pulled apart the side mirror on the driver's side of the bus, using it to hit the windscreen, causing several scratches.

He kicked the door of the bus in an attempt to open it, but again failed, and pulled apart the rubber seal of the bus door.

A staff member from the SMRT operations office called the police.

Although no damage was caused to the first bus, DPP Hidayat said the other suffered damage - including to its windscreen and mirror - that needed repairs totalling $6,200.

Zhu made full restitution to SMRT on Sept 6 this year.

DPP Hidayat said in his submissions that Zhu's actions were unprovoked and sustained, adding that he had sought to damage both buses.

"It was only fortuitous that the first bus did not sustain any unquantifiable damage and that he was unsuccessful in opening the doors," said DPP Hidayat, who proposed a sentence of three to five week's jail.

"The message needs to be sent that offenders who damage public property, especially those that serve Singaporeans, must be dealt with seriously," he added.

For causing mischief, Zhu could have faced a maximum punishment of two years' jail and a fine.

Related Stories
Construction worker 'attacked' 2 buses at Woodlands depot after drinking 7 cans of beer
Man arrested after smashing taxi with helmet, throwing windscreen wiper at it while baby was onboard
Cyclist chases after car, smacks it while screaming vulgarities at Serangoon roundabout
More About:
drunk
mischief
Bus
vandalism
court