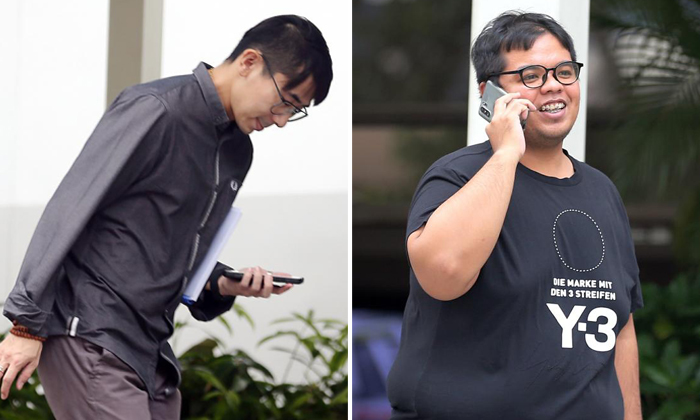 They sped down Lim Chu Kang Road in similar cars and clocked almost equal breakneck speeds in their illegal race.

They will also be disqualified from driving all classes of vehicles for three years after their release.

The men, who were both driving a Volkswagen GTI, had denied that they were involved in the illegal race, which took place on Dec 9, 2016.

The pair also similarly claimed trial against the charge of illegal racing, an offence under the Road Traffic Act.

During the hearing, Goh said that he had been rushing to go to the toilet, while Khairulanwar claimed that he was speeding because he wanted to check his engine check-light.

He added: "It is simply implausible and fanciful that (they) happened to be speeding, at almost twice the speed limit and right next to each other, at a place where a race was ongoing at the material time."

The court heard that the two men were arrested by Traffic Police (TP) officers during a sting operation led by Inspector Pardeep Dass, who had received intelligence that there was going to be an illegal race in the area.

Together with two other TP officers, Insp Pardeep arrived at the scene in an unmarked car. The officers saw people standing around 40 vehicles parked along Lim Chu Kang Road towards Neo Tiew Road.

At 1.07am, the cars driven by Goh and Khairulanwar were seen making a U-turn towards Jalan Bahar before coming to a stop side by side for about 10 seconds.

Insp Pardeep then saw both cars speeding off at the same time. The TP officers were activated to pursue them.

Goh was caught driving at 132kmh, while Khairulanwar had clocked 136kmh - nearly twice the speed limit of 70kmh.

Both men will also start their sentences on the same date - Sept 19.