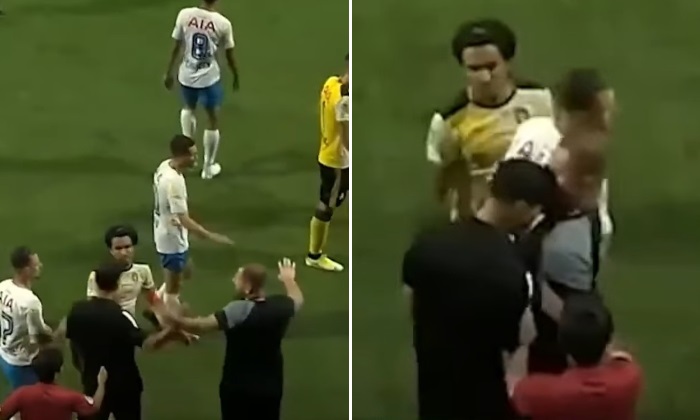 The Football Association of Singapore (FAS) has moved swiftly to hand down charges to both the Lion City Sailors and Tampines Rovers on Monday (July 25) evening, just 24 hours after their Singapore Premier League match which saw a fracas break out at the end.

In response to queries, FAS director of competitions Aloysius Vetha told The Straits Times that they made the move after "viewing of the relevant footage and match reports".

Sailors head coach Kim Do-hoon and Tampines assistant coach Mustafic Fahrudin - who were involved in physical altercations - were each charged with violent conduct.

Vetha said that the parties have until 6pm on Wednesday to provide any written responses, with a disciplinary committee (DC) hearing scheduled for Thursday.

"As the matter is now before the DC, no further comments will be made till the completion of the judicial process," he added.

Towards the end of the football match played at the Jalan Besar Stadium, Kim appeared to headbutt Fahrudin as a skirmish for the ball took place between players from both teams.

Fahrudin, a former Singapore midfielder, was seen clutching his face after the incident. Kim was shown a yellow card by referee Ahmad A'qashah before play resumed.

While matters appeared to cool down after the game as Kim and Fahrudin shook hands, tension soon built again with both sets of players and officials engaging in shoving matches both on the pitch and sidelines.

Fahrudin, 41, was then seen squaring up to Kim on the Sailors' bench, with eyewitnesses alleging he grabbed the 52-year-old former South Korea striker by the neck.

Sources told ST that Tampines officials lodged an incident report with the police on the alleged headbutt after they left the stadium.

When contacted yesterday, Tampines chairman Desmond Ong declined to comment on the matter or confirm whether a police report had been filed.

Sailors chief executive officer Chew Chun-Liang said the club regretted the incidents and are looking into them.

“It is clear that the unsavoury scenes witnessed at the Jalan Besar Stadium near the end and after the match on Sunday evening do not help the Singapore football cause, and we are regretful that this happened,” he said.

“Both teams contributed to the scenes, but we must expect better of ourselves. As a club, we are already taking steps to ensure that such scenes are not repeated, and that we continue to match the high standards that our fans expect of us both on and off the field. We are conducting internal investigations on the matter as we speak.”

He added that the post-game altercations overshadowed “a good contest between two teams”, and that the club aim to keep their focus on football and defend their SPL title even as they reflect upon what took place.

There was also an incident as Tampines players headed down the stadium tunnel, where the Stags were “personally insulted” and Sailors supporters’ group The Crew wrote on Facebook that they “strictly do not condone the actions of fans involved”.

The group also called for the club’s supporters to refrain from similar actions and “aggression” in future games.

The post-game incidents marred a pulsating match which the Sailors won in injury time with a goal by defender Pedro Henrique.

The result helped the Sailors, who had drawn their previous two games, return to winning ways and restored their five-point lead ahead of Friday’s top-of-the-table clash with Albirex Niigata.