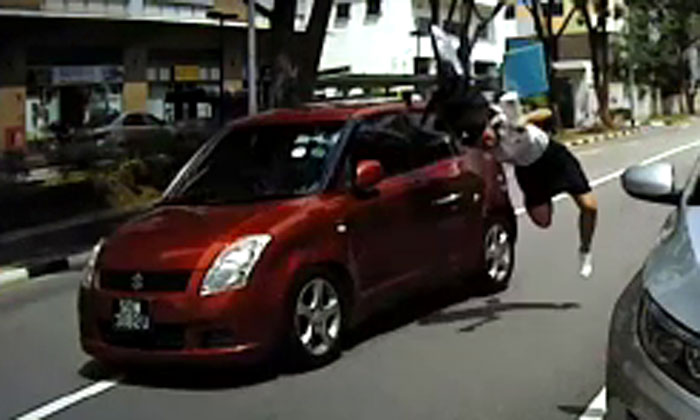 A 16-year-old girl was taken to hospital after she was hit by a car while crossing Ubi Road on Monday (Mar 16).

Stompers Ah Boy, Gabriel and Douglas alerted Stomp to two videos of the incident that have been circulating online.

The girl, who appears to be wearing a school uniform, was seen stepping onto the road between a taxi and one of the dash cam vehicles.

She is seen looking left before starting to dash across the road before being hit by a car from the right and flung onto the road.

Passers-by are seen stopping to check on her and two of them are seen carrying her to the pavement.

In response to a Stomp media query, a police spokesman said that they were alerted to an accident involving a car and a pedestrian along Ubi Road 1 towards Airport Road at 2.47 pm on Monday.

"The pedestrian, a 16-year-old girl, was conscious when conveyed to Changi General Hospital," the police spokesman said.

Related Stories
Cabby who reversed into elderly man sacked by ComfortDelGro, victim taken to hospital
Mystery video of woman who ends up on car's bonnet after getting hit at pedestrian crossing posted on FB
65-year-old woman unconscious after being hit by lorry in Commonwealth
More About:
accident
hit-and-run
pedestrian
injured