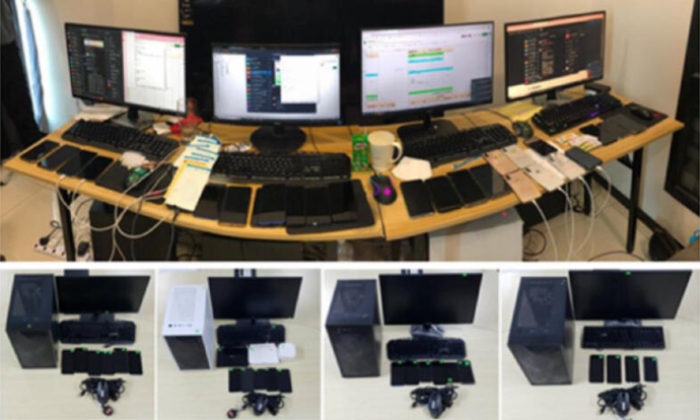 Since last month, the two countries have shared critical information based on findings from reported scam cases. Through close collaboration and joint investigations with CCID, the syndicates believed to be behind the money laundering cells were identified to be based in Kuala Lumpur and Johor.

On  Aug 10, a team of 12 Anti-Scam Command officers from CAD, together with the Malaysian officers, conducted simultaneous raids at two apartment complexes in Kuala Lumpur and Johor. Two female and seven male Malaysians aged between 19 and 39 years were arrested for their suspected involvement in cross-border money laundering.

Preliminary investigations revealed that the two syndicates are believed to have targeted Singaporean, Malaysian, Thai and Indonesian victims and laundered their criminal proceeds in Malaysia.

Simultaneously in Singapore, officers from the Anti-Scam Command arrested two men and two women, aged between 18 and 49 years, for their suspected involvement in aiding the money laundering syndicate by handing over their personal bank accounts or relinquishing their SingPass accounts. Another 24 individuals are assisting the police in their investigations.

Investigations against the Singapore suspects are ongoing.

Director CAD, Mr David Chew said, “Cyber-enabled scams continue to be an area of serious concern. The Internet continues to be used to deceive victims as well as recruit money launderers, often with promises of quick monetary returns.

"I strongly urge that the public stay away from the lure of easy money by responding to jobs that involve the abuse of your Singpass or bank accounts. It is a criminal offence to abuse your Singpass and banking facilities at the behest of such criminals.

"We will take firm action against the money mules in Singapore, who sell their bank accounts and SingPass details to these syndicates or knowingly participate in the laundering of their proceeds of crime.

"The Singapore Police Force will continue to collaborate with our foreign law enforcement counterparts to detect and deter these transnational syndicates who prey on our citizens."

The police would also like to advise members of the public to call the Anti-Scam Hotline at 1800-722-6688 or visit www.scamalert.sg to seek scam-related advice.