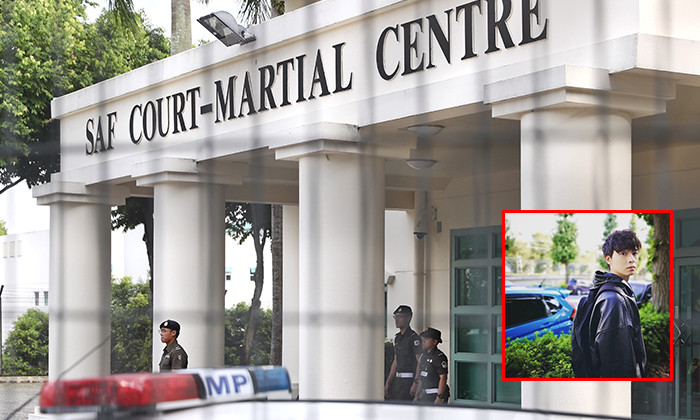 Two soldiers who were in the cabin of a howitzer artillery gun with the late actor Aloysius Pang were charged in military court on Wednesday (July 31), said the Ministry of Defence.

Teo, a regular technician, faced three charges: one charge of disobedience of general orders under the SAF Act, and two charges of causing death by negligent act under the Penal Code.

A person convicted of causing death by rash act faces a jail term of up to five years, a fine, or both.

Mindef said in a statement earlier on Wednesday morning that the two would be charged at the Court Martial Centre in Kranji Camp II, which is presided over by a serving State Court judge.

The two servicemen looked solemn as they turned up in court in their green Number 4 uniform accompanied by uniformed escorts, and confirmed that the charges had been read to them when asked by the judge.

The court heard that both servicemen have applied for pro bono legal services. Proceedings were adjourned for four weeks for a pre-trial conference with a date yet to be fixed.

The judge granted bail of $5,000 each with surety, and for the servicemen's passports to be impounded.

Corporal First Class (NS) Aloysius Pang, an armament technician from the 268th Battalion Singapore Artillery, died on Jan 23, four days after he was seriously injured while in the Singapore Self-Propelled Howitzer (SSPH) during a live-firing exercise in New Zealand.

As CFC Pang, 28, died in New Zealand, the Singapore police do not have jurisdiction to conduct investigations into his death, said Mindef.

“Investigations into his death were conducted by the SAF’s Special Investigation Branch (SIB), and the Chief Military Prosecutor has decided to prosecute the two SAF servicemen based on the investigation findings of the SIB,” it added.

The Chief Military Prosecutor is Ms Teoh Ai Lin, a senior legal officer deployed to Mindef by the Legal Service Commission, headed by the Chief Justice.

Reporting the findings of an independent Committee of Inquiry set up to investigate his death, Defence Minister Ng Eng Hen told Parliament in May that each of the three soldiers in the cabin of the SSPH had committed lapses that led to the actor’s death.

Among other breaches, the three men – including the gun commander and a regular technician – failed to follow the requirement that everyone must be in safe positions during the movement of the gun barrel.

The regular technician also did not ensure the gun barrel was locked before starting the maintenance work of replacing the interface card found in the cabin.

Inspections of the SSPH have not detected any machine malfunction of the gun-lowering mechanism. CFC Pang, an operationally-ready national serviceman, was injured when he was caught between the back of the gun barrel and the interior of the cabin.

The regular armament technician in the cabin with CFC Pang had been in service for more than 16 years, with eight years of working experience on the SSPH, said Dr Ng in Parliament on Feb 11.

The gun commander was on his eighth in-camp training and had undergone refresher training prior to his deployment in the exercise, added Dr Ng then.