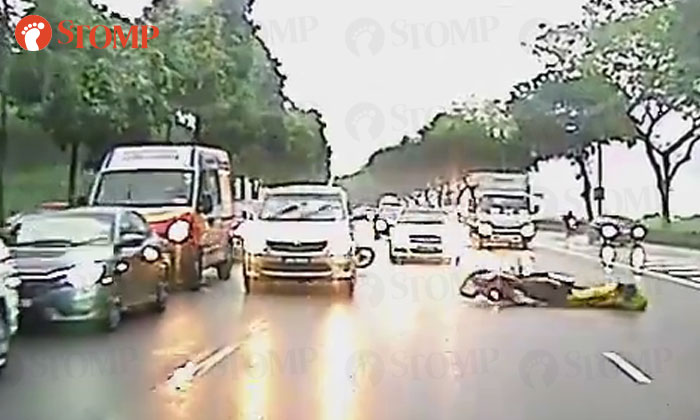 Two motorcyclists were taken to hospital after they were involved in an accident with a car along the Seletar Expressway (SLE) towards the Tampines Expressway (TPE) on Friday (Sep 7).

A video of the incident was posted on ROADS.sg's Facebook page showing what happened.

In the video, a car is seen moving from the middle lane to the rightmost lane, behind an ambulance.

Posting as video witness
The driver of JNS8929 was double minded and decided to avoid the ambulance stopping and swerved...

The driver then suddenly decides to move back into the middle lane but does not indicate or appear to check before changing lanes.

In doing so, he ends up knocking over a motorcyclist who was coming up on his left and causing another rider to fall off his bike after crashing into the back of his car.

The witness who contributed the video said that one of the motorcyclists "hit his head hard" on the road.

In response to a Stomp media query, the police said they were alerted to the accident at 5.34pm on Sep 7.

"Two motorcyclists, aged 27 and 37, were conscious when conveyed to Khoo Teck Puat Hospital," a spokesman said.

Related Stories
Motorcyclist injured after getting knocked off bike by car in hit-and-run accident on PIE
Lotus driver, female motorcyclist and pillion rider taken to hospital after collision at Eunos Link
2 pedestrians narrowly miss getting hit by 2 cars that collided at Bedok North junction
More About:
Accidents
motorcyclist