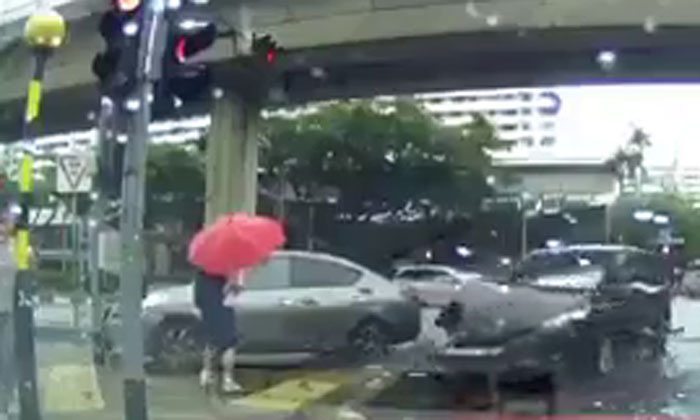 Two pedestrians were left shell-shocked after they were nearly hit by two cars that collided at a Bedok traffic junction on Monday morning (Sep 3).

Stomper Briant alerted Stomp to a video of the incident was posted on Facebook by taxi driver Felix Chan who said it happened at about 8.35am at the junction of Bedok North Avenue 3 and New Upper Changi Road.

In the video, a woman and a boy wearing a school uniform are seen waiting for the green man to go on at the traffic light and carrying umbrellas in the rain.

A maroon car is seen making a right turn onto Bedok North Avenue 3 when it is hit on the left side by an oncoming grey sedan.

The grey car then veers towards the pedestrians who, fortunately, manage to avoid it.

However, seconds later, the maroon car continues to move forward past the pedestrians and almost hits Mr Chan's taxi which is stationary at the junction.

The schoolboy and the woman are visibly shocked following the incident as they take in what just happened.

The Straits Times understands that no major injuries were reported on the incident.

Related Stories
Mazda rams into 2 parked cars along Geylang Lor 14, police investigating
Rider suffers multiple injuries after getting knocked off bike and run over by MINI on CTE
Rider, 22, taken to hospital after his motorcycle ends up under bus in accident at Jurong Town Hall Rd
More About:
Accidents
close shave
pedestrians
collision