2 pedestrians, including two-year-old child, taken to hospital after accident in Sengkang 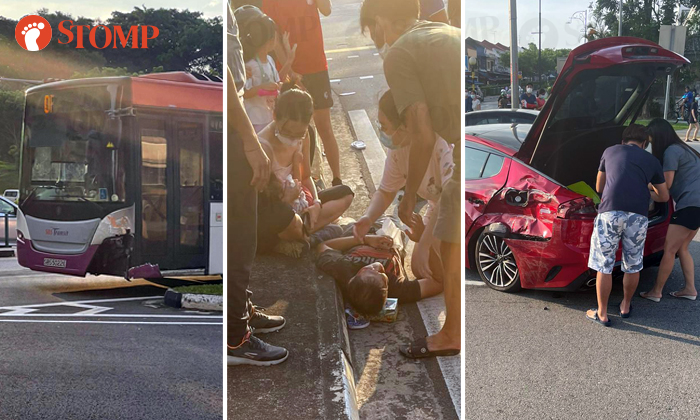 Two pedestrians, aged two and 35, were taken to hospital after an accident involving a bus and a car in Sengkang on Sunday (June 6).

In response to a Stomp query, the police said they were alerted to the accident at the junction of Jalan Kayu and Sengkang West Way at 5.57pm.

The two pedestrians were conscious when taken to hospital.

Stomper K shared photos showing a red car and an SBS Transit bus, both of which were visibly damaged, at the scene.

In one picture, a male can be seen lying on the road near the road divider with a small crowd gathered around him.

Ms Tammy Tan, senior vice president of corporate communications at SBS Transit, said: ""Our bus was travelling straight with the green light in its favour when a right-turning car from the opposite direction suddenly came into its path.

"The impact thrust the car towards the pedestrian crossing where it hit two pedestrians.

"No one on the bus was conveyed to hospital.

"Meanwhile, we are assisting the Police in its investigations."