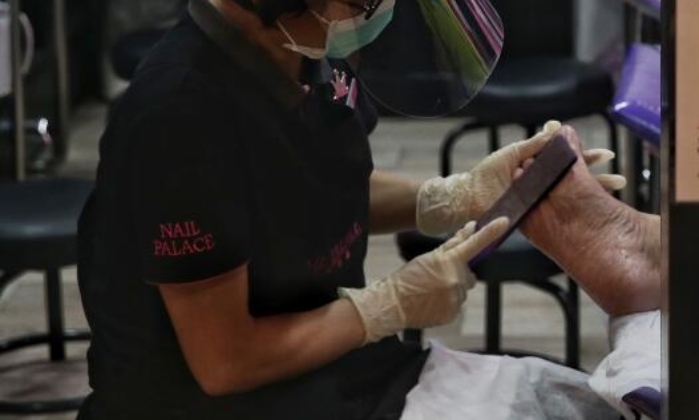 Two Nail Palace outlets have been ordered by the court to stop misleading customers into signing up for packages to treat purported nail fungus infections.

The nail salon chain, which opened in 2002, lists 28 outlets on its website. Many are located in heartland malls.

The restraining orders were sought by the Competition and Consumer Commission of Singapore (CCCS) against the group's outlets at Bukit Panjang Plaza and East Point Mall.

In written grounds published on Wednesday (Aug 17), District Judge Elaine Lim agreed with the regulator and declared that the two outlets had engaged in unfair practices under the Consumer Protection (Fair Trading) Act.

The judge also ordered the outlets to publish details of the declaration and restraining order granted against them in full-page notices in various newspapers including The Straits Times.

Judge Lim also ordered that for the next two years, the outlets have to notify customers about the declaration and restraining order before entering into a contract in relation to consumer transaction.

The CCCS had submitted affidavits from two customers - one from the Bukit Panjang Plaza outlet who paid $1,677.76 and one from the East Point Mall outlet who bought a package for $11,401.92.

Nail Palace denied that it had misled the customers and resisted the commission's bid for the various orders.

The company submitted affidavits from two employees, as well as its managing director Kaiden Cheng and training manager Catherine Lai.

But Judge Lim found that employees had misled the customers into signing up for fungal treatment packages by telling them that they had fungus on their toenails.

In addition to misrepresenting the need for such treatment, the employee at the East Point Mall outlet had also misled the customer into paying for certain products by omitting to mention that they were part of the package, said the judge.

The court heard that the Bukit Panjang Plaza customer had gone there in August 2020 for a pedicure and was told there was fungus on her big toe.

Offered a package comprising 12 sessions of fungal treatment for about $3,000, she was told that if she did not undergo the treatment, the infection could spread to other toenails.

Out of fear, she eventually agreed to sign up for a six-session package.

She later went to the Small Claims Tribunals to seek a refund for unused sessions after she consulted a doctor, who determined that she had no fungus on her toenails.

The other customer had visited the East Point Mall outlet in December 2019, and was told that she had fungus on her toenails.

The employee said the infection could spread to her husband and offered her a 15-session fungal treatment package, which was revised to a 12-session package.

The customer was also told to take several lipsticks and lip balms as they were free of charge.

Two days later, when the customer collected the invoice from the outlet, she realised that she had been charged $678 for the lipsticks and lip balms.

Nail Palace said its Bukit Panjang Plaza employee merely told the customer that the gap between her toenails and the toe bed may be an indication of fungal infection.

The salon said the customer requested the treatment of her own accord.

As for the East Point Mall incident, the salon admitted that its employee told the customer that she needed the treatment.

However, Nail Palace said it was the customer's own decision to purchase the package without asking for confirmatory tests.

It added that the customer had no evidence that she did not have toenail fungal infection at the time.

The CCCS said many customers had complained to the Consumers Association of Singapore (Case), but the chain repeatedly refused Case's invitations for it to enter into a voluntary compliance agreement to stop unfair practices or compensate affected customers.