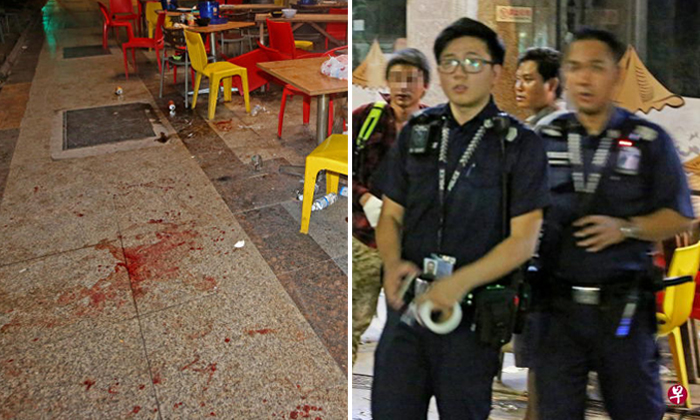 A birthday celebration turned bloody when a drunken brawl between two men broke out at a coffee shop along Coleman Street on Sunday night (Aug 5).

The police, who were alerted to the case of affray at 10.47pm, told Stomp that two men were conscious when taken to Singapore General Hospital.

The two men, in their 20s and 30s, were subsequently arrested in relation to the case.

A witness told Shin Min Daily News that he had been having a meal and chatting with colleagues at the coffee shop when two men at a table nearby got into an altercation.

Mr Mo, 32, said: "There were four men and one woman seated at that table. One of them was a tattooed man who suddenly stood up and attacked a guy in a red shirt. The latter retaliated."

According to Mr Mo, there were at least 10 beer bottles and beer glasses on the table, which the men picked up and threw at each other.

The tattooed man, believed to have been cut by broken glass shards, reportedly had blood all over his head and body.

He apparently then tried to leave, but collapsed about five metres away.

It is understood that he suffered injuries on the head.

"The coffee shop had already closed and there were only our two tables left," added Mr Mo.

"The scene was like a fighting sequence in a movie."

Mr Mo also said that those involved in the dispute had just been celebrating a friend's birthday 30 minutes before the fight occurred.

"They were singing birthday songs. Not sure what led to a conflict. More than 10 police officers arrived at the scene afterwards."

When Shin Min reporters visited the coffee shop, they saw the police speaking to a man clad in red. His right hand was bandaged. Another man in grey was also speaking to officers.

It is believed that the two men got into a fight after they became drunk, reported Shin Min.

The incident left traces of blood on a wall and the ground, including a five-metre-long trail.