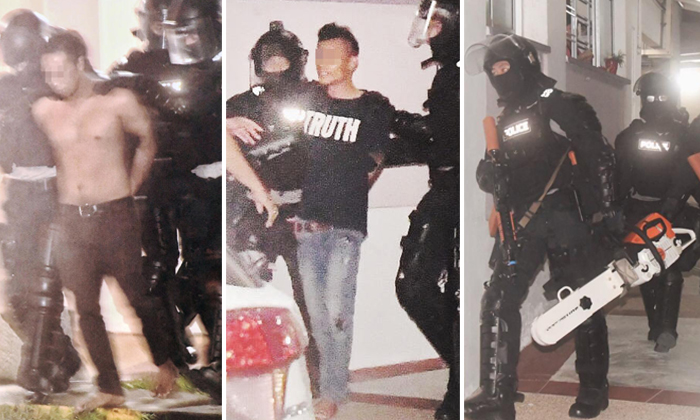 Two men, both aged 30, allegedly injured a woman with a penknife in Jurong West and were arrested following a four-hour stand-off with the police on Monday (Nov 19).

In a statement, the police said that they were alerted to a case of assault at a bus stop near Block 501 Jurong West Street 51 at 2.45pm that day.

When officers arrived at the scene, the alleged attackers had fled the scene

A woman with facial injuries and lacerations on her arms told the police that two men had attacked her with a penknife. She was subsequently conveyed to hospital.

Officers from Jurong Police Division established the identities of the two suspects through ground enquiries and images from police cameras.

The pair was arrested along Jurong West Street 41 on the same day at around 9pm, with the assistance of Special Operations Command (SOC) officers.

A knife was seized in relation to the case.

According to Shin Min Daily News, the two men had refused to open the door to their unit and engaged in a four-hour stand-off with the police.

Officers were able to gain access into the unit with the help of a locksmith.

A witness told Shin Min that there were five to six people living in the unit in question.

"There were around 20 police officers at around 4pm. Two hours later, another 20 SOC officers appeared," said 38-year-old Mr Ye.

When Shin Min reporters arrived at the scene, they saw that an area measuring the size of two football fields had been cordoned off.

The commotion had drawn around 100 onlookers.

If convicted, they are liable to a jail term of up to seven years, a fine, caning, or any combination of such punishments.