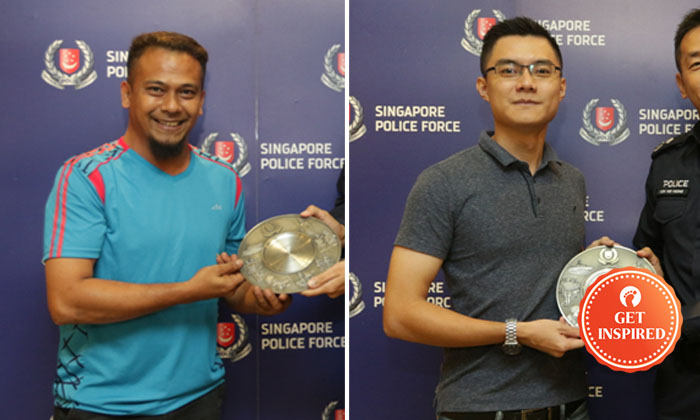 Mr Yap and Mr Yusoff were commended for their public-spiritedness in a ceremony held at the Public Transport Security Command (TransCom) on Oct 17.

In the first case, Mr Yusman spotted a 23-year-old man holding his mobile phone in a tilted position to take an upskirt video of a woman, while walking from Toa Payoh MRT Station to Toa Payoh Bus Interchange on Sep 19 at about 7.20pm.

Mr Yusman then alerted TransCom officers who were patrolling at the station.

In the second case, Mr Yap was on an escalator at Hougang MRT Station on Oct 3 at about 8.50pm, when he noticed that a man in front of him had placed his mobile phone underneath a woman's skirt.

He approached the man and managed to detain him at the MRT station before alerting the police.

“Commuters are advised to be vigilant to their surroundings. Mr Yusman’s and Mr Yap’s willingness to step forward to assist the victims, leading to the arrest of the suspects was commendable.