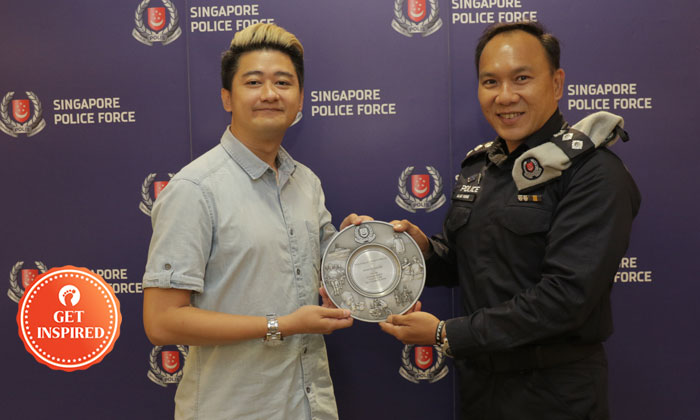 Mr Wong Dong Hai was travelling on the escalator at Bishan MRT Station on Aug 21 at about 6.20pm when he noticed a man in front of him behaving suspiciously.

The 37-year-old man in front of him had placed his mobile phone underneath a woman's skirt.

When Mr Wong approached the man, he tried to flee but Mr Wong detained him at Bishan Bus Interchange after a short chase.

In a separate incident, Mr Ng Jian Zuan was travelling on the escalator at Braddell MRT Station on Sep 8 at about 10.30pm when he noticed an 18-year-old man in front of him had placed his mobile phone underneath a woman's skirt.

He approached and detained the man

The two courageous members of the public were commended for their public-spiritedness in assisting police detain the two men in connection with the two cases of insulting the modesty of a woman.

In a ceremony held at the Public Transport Security Command (TransCom) on Wednesday morning (Sep 12), Mr Wong was presented with a token of appreciation by Head Operations, TransCom, Superintendent of Police (SUPT) Alan Wong.

Mr Ng was not available to attend the ceremony.

SUPT Alan Wong said, “Commuters must be vigilant to their surroundings when travelling on public transport. The public transport will be a safer place when commuters keep a lookout for each other and help the Police to deter crime. Anyone who insults the modesty of women may be jailed for up to a year and/or fined.”