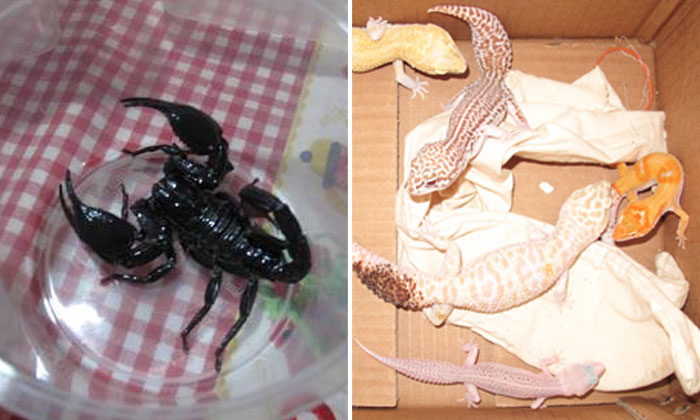 Two men were fined a total of $11,000 for wildlife-related offences in separate court cases on Wednesday (July 18), the Agri-Food and Veterinary Authority of Singapore (AVA) said in a statement on Thursday (July 19).

AVA said Muhammad Effendi Roslan, 27, was fined $6,000 for the possession of an Indian star tortoise, one scorpion, a red-bellied short-necked turtle and two corn snakes.

AVA said that in February 2017, it received feedback from the Animal Concerns Research and Education Society (Acres) on an alleged sale of illegal wildlife via online marketplace Carousell.

The authority then conducted a raid on Effendi's residence after investigating the feedback and seized the exotic animals that were in his possession.

(Clockwise from left) An Indian star tortoise (CITES-protected species), one red-bellied short-necked turtle, one scorpion and two corn snakes were seized and placed under the care of Wildlife Reserves Singapore (Photo: AVA)

The keeping and trading of illegal wildlife and wildlife parts/products, is an offence in Singapore," said the AVA.

In the second case, AVA was alerted by the Immigration & Checkpoints Authority (ICA) in June 2017 on the detection of five live geckos hidden inside two pillows at the rear passenger seat of a Singapore-registered car at Woodlands Checkpoint. 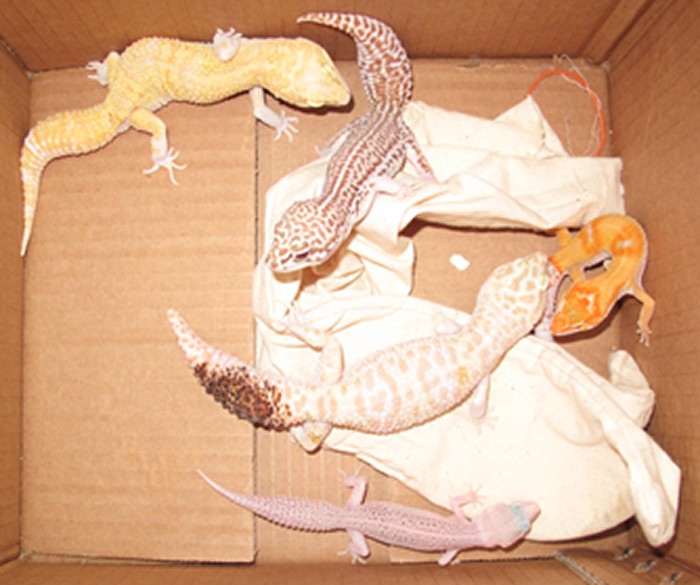 The five live geckos were seized and placed under the care of Wildlife Reserves Singapore. (Photo: AVA)

They were identified to be leopard geckos which are not approved pets in Singapore.

"Animals that are smuggled into Singapore are of unknown health status and may introduce exotic diseases into the country," said the AVA.

Those convicted of keeping and trading illegal wildlife and wildlife parts or products could be fined up to $1,000.

If the wildlife species are protected under the Convention on International Trade in Endangered Species of Wild Fauna and Flora (Cites), those convicted of being in possession of or found advertising and selling illegally imported Cites protected species will face a fine of up to $500,000 and up to two years' imprisonment.

Those who import animals or birds without a licence can be fined up to $10,000, jailed up to 12 months, or both.

Importation of any Cites-protected species without Cites permits is also an offence. Offenders can be fined up to $500,000 and jailed for up to two years.

Related Stories
Plan on keeping an exotic animal as a pet? Be warned, it might be illegal
Man auctions electric eel starting from $1 on Facebook -- but isn't it dangerous?
Exotic animal seller who warned people not to report him is back with more ads for hedgehogs and tarantula
More About:
illegal
smuggling
wildlife
exotic animals
tortoise
snakes