2 men arrested for theft after allegedly swapping seller's $35,000 Rolex with fake during meetup 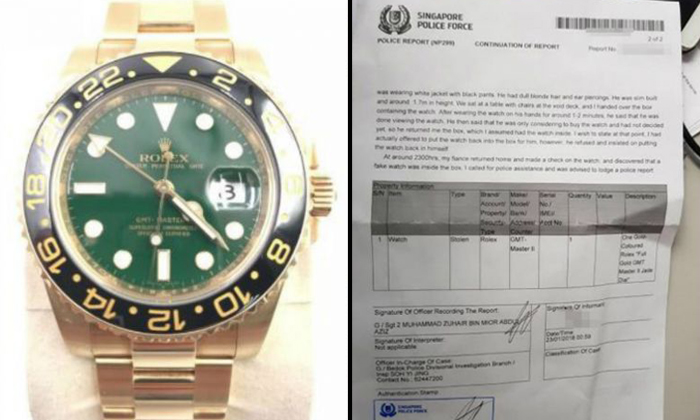 Two men, who allegedly swapped an authentic Rolex watch for a counterfeit one, have been arrested for their suspected involvement in theft.

Mr Tang Guoxian, 30, had put up his Rolex watch, worth $35,000, for sale on Carousell. He planned to use the money to buy a house with his fiancee.

An interested buyer contacted him but as he was busy, Mr Tang got his fiancee to meet the buyer at the void deck of home in Boon Keng Road.

The buyer allegedly looked at the watch, insisted on placing it back into the box, and then left in a hurry.

Mr Tang made a police report after realising that he might have cheated out of his watch.

In a news release yesterday (Jan 31), the police said they have arrested two men, aged 20 and 24, in relation to the case.

The arrest was made on Jan 30 at Tuas Checkpoint and the genuine Rolex watch was recovered.

The suspects will be charged in court today (Feb 1) with the offence of theft with common intention. If convicted, they will face a jail term of up to three years and/or a fine.