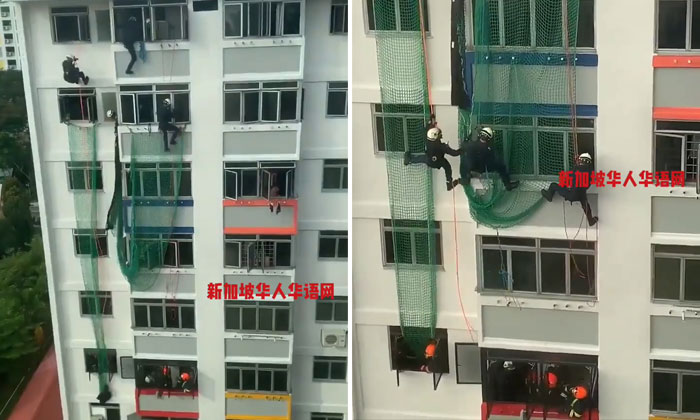 Two men were arrested for suspected drug-related offences after one of them was seen sitting on a ledge at Block 70 Circuit Road on Wednesday morning (June 10).

Stomper Randy alerted Stomp to a video of the incident that was posted on Facebook.

In the video, Disaster Assistance and Rescue Team (DART) officers from the Singapore Civil Defence Force (SCDF) are seen rappelling down the block.

The post says: "A man was sitting on the window ledge off-camera, but a safety life air pack was deployed on the ground floor and SCDF rescued him from above."

It also praised SCDF on a job well done.

In response to Stomp queries, both the police and SCDF said they received calls for assistance at 8.20am.

"Upon arrival, a man was seen sitting on a ledge," an SCDF spokesman said.

"SCDF deployed nets and DART rescuers rappelled from the unit above to rescue the person."

The police told Stomp that two men, aged 44 and 53, were arrested for suspected drug-related offences.

The police are also looking into possible breaches of safe distancing measures under the COVID-19 (Temporary Measures)(Control Order) Regulations 2020 by both men.

In a similar incident, Stomp earlier reported on a 59-year-old woman who was arrested after getting rescued from the ledge of a Yishun block on Wednesday afternoon (June 10).

Related Stories
59-year-old woman arrested after getting rescued from ledge of Yishun block
SCDF rescues woman who fell into Singapore River after allegedly consuming too much alcohol
Uncle taken to hospital after seen lying on ground at Chong Pang market
More About:
scdf
rescue
DART