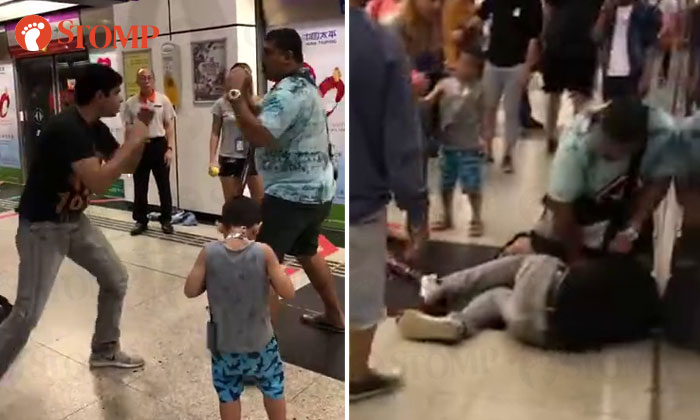 Two men, aged 36 and 20, were arrested for affray at Dhoby Ghaut MRT Station on Sunday (Sep 2) after they were caught on video throwing punches at each other.

Stomp reported on the fight on Monday (Sep 3) after Stompers Helmi, David and Karthik alerted Stomp to the video that had been circulating on WhatsApp.

In the video, the two men are seen facing each other with their hands up in a fighting stance, just like mixed martial arts (MMA) fighters, as onlookers keep their distance.

A woman and a couple of SBS Transit staff are seen trying to break up the fight.

The woman is seen pointing at the man wearing a black T-shirt and saying, "He's wrong! He's wrong!"

When a passer-by tries to calm the man in black down he says, "Look at what he did to my face" before throwing another punch at the other man wearing blue.

He then tells the station's staff to call the police. A staff member replies that he has already done so and tells him, "Don't worry, they will take action".

In response to a Stomp media query, the police said that they were alerted to a case of affray at 10pm on Sep 2 at 13 Orchard Road.