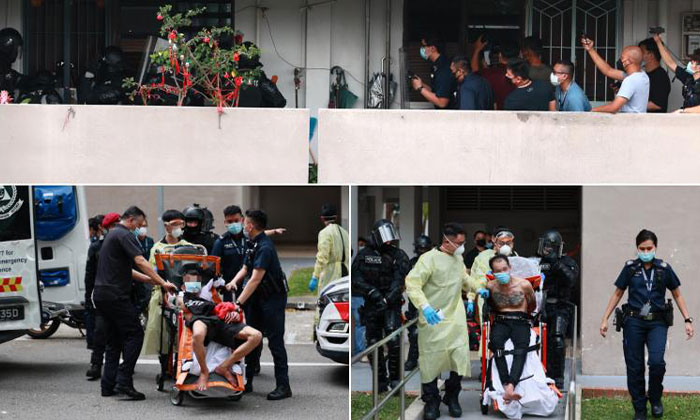 Residents of a Housing Board block in Ang Mo Kio were alarmed when they heard yelling and banging on doors on Tuesday morning (March 22) as law enforcement officers took steps to end a stand-off lasting five hours.

Two life safety air packs were also deployed by the Singapore Civil Defence Force (SCDF) with its Disaster Assistance and Rescue Team on standby as a precautionary measure.

The air packs are often used when there is a risk of fall from height.

The stand-off occurred at Block 508 Ang Mo Kio Avenue 8 as two men, aged 52 and 53, locked themselves in the eighth-storey unit with their 77-year-old mother.

They had earlier refused to cooperate with Central Narcotics Bureau (CNB) officers who were at the unit to conduct an enforcement operation.

The police, who said they received a call for assistance at 6.58am, told The Straits Times that officers from the elite Special Operations Command had to eventually force their way in.

“It was assessed that the two men might pose a danger to themselves and their mother,” said the police, who added that the men were arrested at 11.55am.

Madam Fiza Hamzah, 32, said she locked her windows after officers told her what was going on.

The housewife, who lives on the floor below the affected unit, said: “I went back inside my flat and locked my windows in case they climbed down.

“I have kids, so it would have been quite dangerous and the police were armed and they all looked very serious.”

The mother of two sons, aged eight and nine, added: “About 30 minutes before they were arrested, there was a lot of shouting. Then I heard the door being slammed.”

Chinese evening paper Shin Min Daily News reported that a police officer was seen holding a shield and speaking to the people inside the unit at the door. 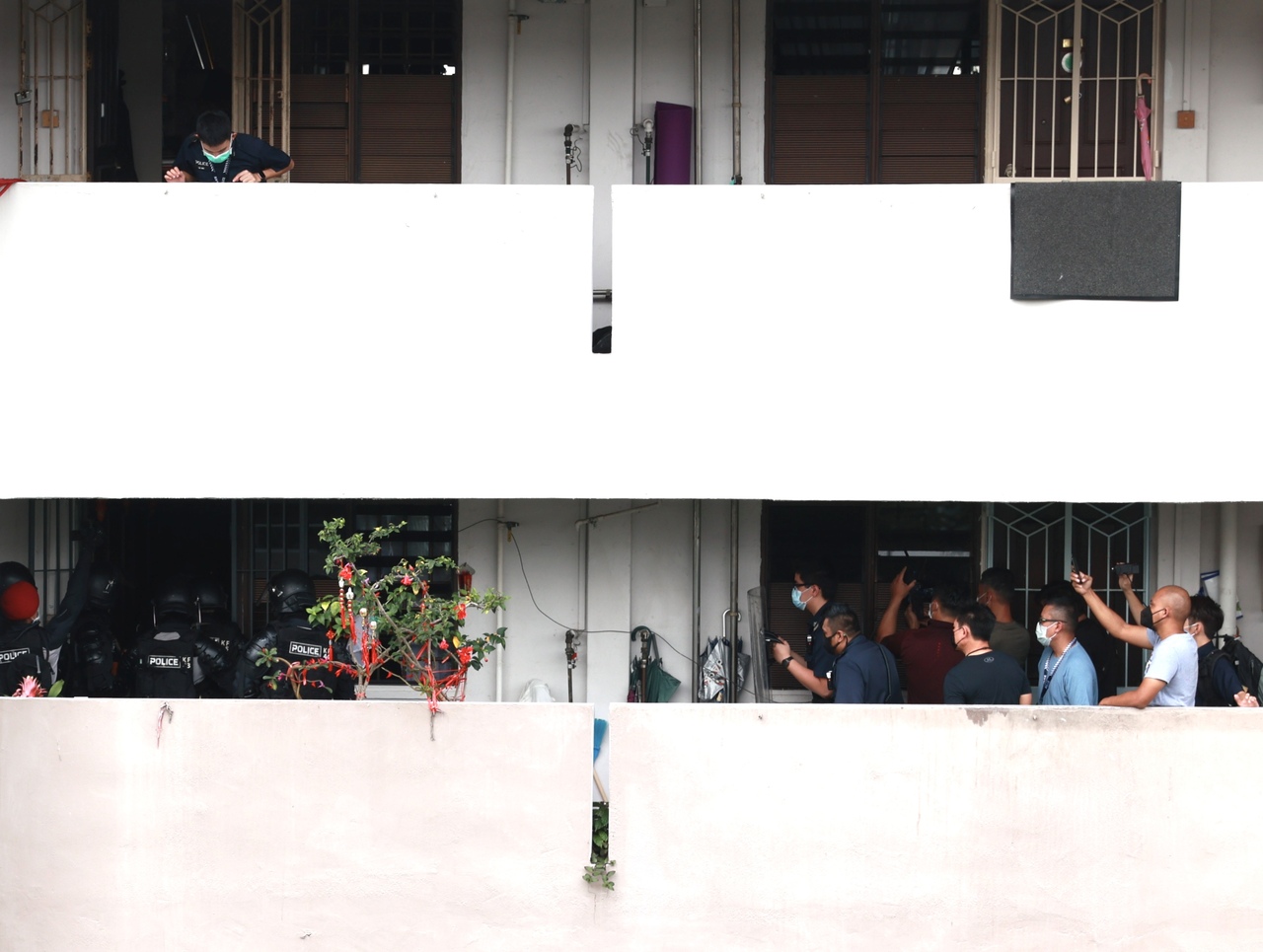 Residents said CNB had raided the same unit in 2016, which also sparked a stand-off. On March 31 that year, a man locked himself and his mother in their flat. He was arrested after a 13-hour stand-off with the authorities.

It was reported then that he had threatened to kill himself and his mother.

Ms Nora Tan, 28, who lives on the ninth storey, was finishing a school assignment at about 7.15am when she saw several police officers walking in front of her front door.

“Once I saw the officers assessing my neighbour’s home, I immediately suspected it was that same flat... At least this time it wasn’t overnight,” said the psychology undergraduate. 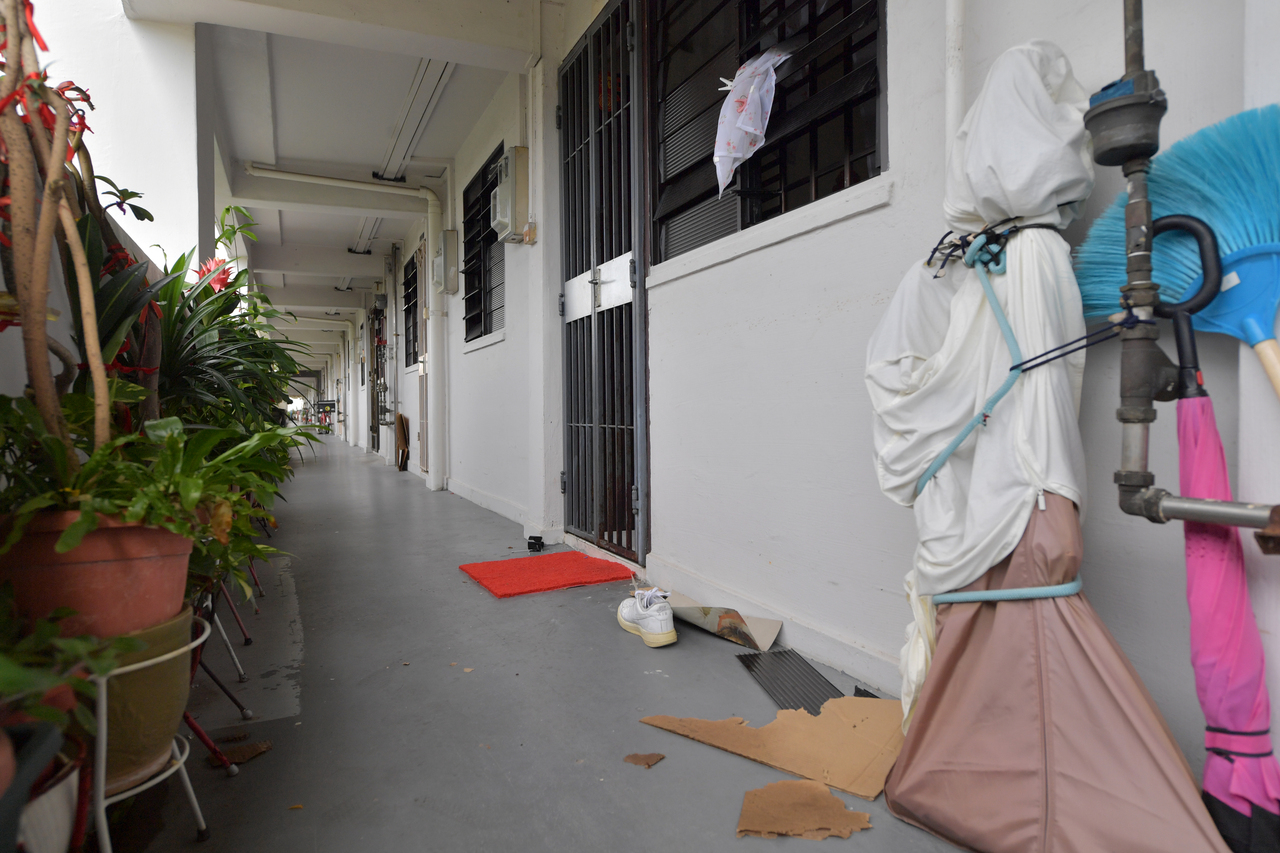 Officers from the elite Special Operations Command had to eventually force their way into the unit. ST PHOTO: ALPHONSUS CHERN

The police said officers from the Crisis Negotiation Unit were also at the scene on Tuesday. The unit includes psychologists who are trained in negotiation tactics.

The two men were arrested for criminal intimidation and suspected drug-related offences.

Investigations by the police and CNB are ongoing.

SCDF said that as a result of the incident, one person was taken to Sengkang General Hospital, while another individual was assessed for minor injuries.

The person refused to be taken to hospital, added SCDF without providing more details.

When ST visited the flat on Tuesday afternoon, a woman who looked to be in her 40s was sweeping the floor of the affected unit. She declined comment.

Ms Nadia Ahmad Samdin, an MP for Ang Mo Kio GRC, wrote on her Facebook page that she and her team were on the ground to check in following the incident in her ward.

“We are working with local community stakeholders and organisations to try and assist the family through this difficult situation,” she said, urging residents who want to get in touch to e-mail her at nadia.ahmad.samdin@pap.org.sg