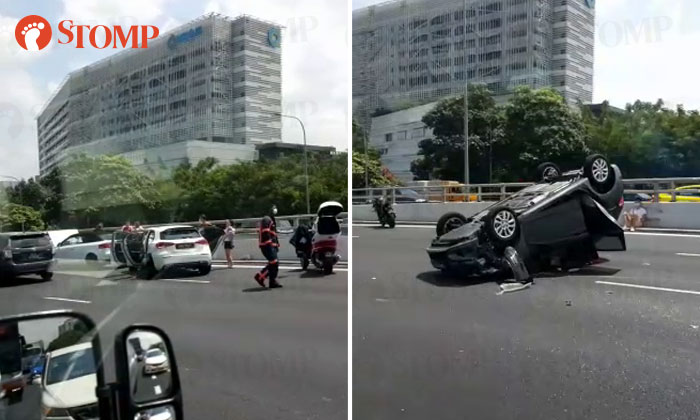 Two men, aged 55 and 25, and a seven-month-old baby girl were taken to hospital after an accident involving five cars and a lorry along Pan Island Expressway (PIE) on Saturday afternoon (July 17).

Stompers Jeff and Watson alerted Stomp to the incident that happened before the Bendemeer Road exit towards Tuas.

In a video shared by Watson, a car is seen overturned along the expressway.

A few people are seen sitting by the side.

According to the Land Transport Authority (LTA), the accident caused traffic congestion until Jalan Eunos and motorists were advised to avoid lanes 1 to 4.

Accident on PIE (towards Tuas) before KPE Exit with congestion till Jalan Eunos. Avoid lanes 1, 2, 3 and 4

In response to a Stomp query, the police said they were alerted to the accident at 12.46am.

"Two men, aged 55 and 25, and a 7-month-old female infant were conscious when conveyed to hospital," a police spokesman said.