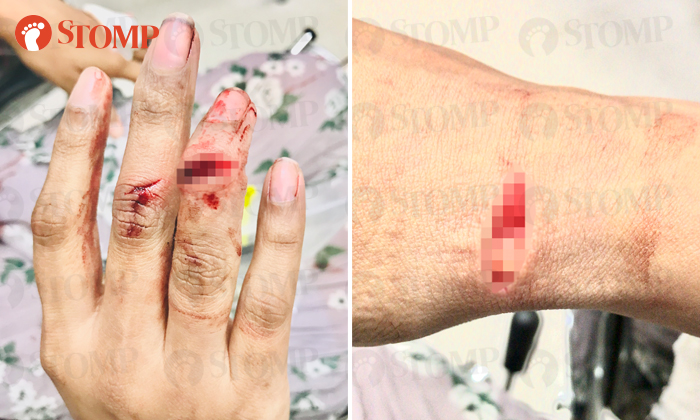 Four people were arrested following an alleged altercation with the employees of a nightclub along Orchard Road in the early hours of Feb 23.

Stomper A and his wife, who manage a nightclub located in the same building as Concorde Hotel, said trouble began brewing at around 3am.

A's wife recounted: "We were performing our daily duties — which include screening patrons at the entrance as well as charging the entry and bottle fees — when a group of people came."

A's wife could tell that the group of four were not regulars of the nightclub, she said.

She told Stomp: "There was already another big group in the nightclub and they are known to be troublemakers.

"One guy from the approaching group tried to sneak into the club to reach the big group, but I stopped him and asked that he go to the entrance."

However, club bouncers denied entry to the entire group, which apparently upset them.

A's wife said: "They were not happy about it and showed secret hand signs, but we didn't take it seriously because it's a normal occurrence in the nightlife scene."

According to her, the group left but returned shortly after at around 3.45am.

"I asked my security to stop them.

"The bigger group from the club came out and said to let the other group in."

Noting that things were already tense, A and her husband tried to diffuse the situation.

She said: 'I told them 'not today, maybe another day.'"

However, the man who had earlier tried to sneak into the club turned aggressive.

A's wife shared: "I thought he was throwing a punch to my husband but he had hidden a karambit in his hand.

"I went in between them to protect my husband by holding his neck and chest with both my hands. The stab fell on my fingers."

A's wife said she suffered injuries on her right wrist as well as the middle finger and ring finger on her right hand (pictured above).

She added: "The man tried to go for my husband's neck but injured his arms instead.

"My husband went into the club and a waitress tried to stop the bleeding by tying a towel around his wounds."

Someone also went upstairs to the reception area of Concorde Hotel to ask for help and the police were called, said A's wife.

According to her, she and her husband went to Tan Tock Seng Hospital for treatment.

"My husband was warded in the emergency room while I had day surgery," she added.

In response to a Stomp query, the police said they received a call for assistance at 100 Orchard Road at 3.55am.

A 37-year-old man was conscious when taken to Tan Tock Seng Hospital.

He had been charged in court on Feb 24, said police.

They added: "A 20-year-old woman was also arrested for causing public nuisance.

"A 23-year-old man was arrested for causing public nuisance, verbally abusing a public servant, and voluntarily causing grievous hurt using dangerous weapon with common intention. He will be charged in court on Mar 7."

Stomper A thanked the police for their swift response and vigilance, adding: "We are just making a living like everyone else.

"This incident is an eye-opener to us as business owners and as life partners.

"My wife, who is also my business partner, selflessly stood up to protect me despite the grievous hurt.

"We never knew our strength as a couple before. We have become really strong ever since and are positive that we are moving towards the right direction.

"We assure that our club is safe and well-secured for every individual."