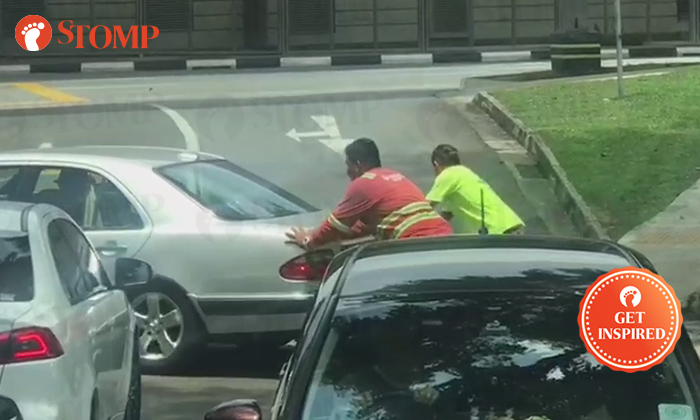 Two men were spotted helping a troubled driver push his car at a carpark at Adam Road Food Centre on Thursday (Oct 17).

Stomper Shade was heading towards his workplace in Novena when he saw the two men helping the driver who was having a hard time moving his car.

He contributed a video of the scene and said: "I was driving out of the carpark at Adam Road Food Centre at about 2.30pm on Thursday when I saw these two men helping the driver out.

"Everyone else was just sitting in their car and some were even honking earlier on.

"Perhaps instead of staying in their cars and honking at a driver who is having difficulty moving his car, they should be like the two guys.

"I had seen the two men picking up rubbish nearby. They were busy with something but were still willing to help.

"They volunteered themselves and it was really heartwarming to see that kindness still exists."

In the video, the two men can be seen helping to push the car back and forth so that the driver can manoeuvre his car into a parking lot.

Shade added: "I was about to go help but my 10-year-old daughter and 4-month-old baby were in the car with my helper. I couldn't do anything.

"I shared this with Stomp to make sure that people can see it doesn't take much to be kind.

"I wish that instead of being impatient and wanting the driver to move off faster, people should be like the two guys and lend a helping hand.

"I hope these acts of kindness can be a daily occurrence."