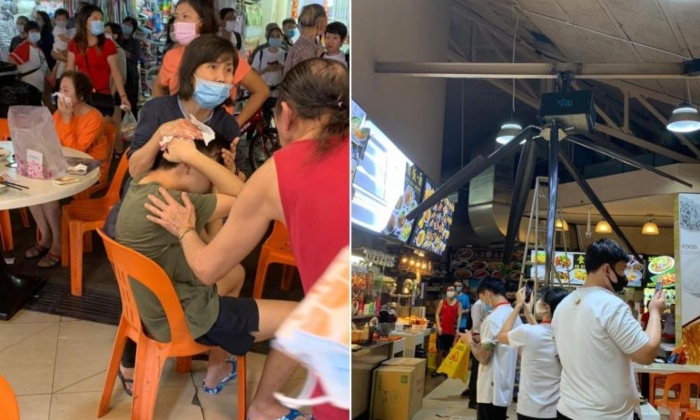 An incident involving a large ceiling fan injured two customers at a coffee shop in Tampines on Wednesday night (Oct 28).

The injured patrons are understood to be a young man and an elderly woman who were seated at the same table.

The Singapore Civil Defence Force said  it received a call for assistance at Block 201D Tampines Street 21 at about 7.10pm on Wednesday. Two people were taken to Changi General Hospital.

And in the 10 years since the fan and another were installed in the coffee shop, there were no earlier incidents with them, said Mr Soh.

After the works were completed, the fan was switched on and a serviceman on site tried to move a ladder below the fan.

This caused the fan's blades to hit the ladder, which resulted in part of a blade breaking off. There are conflicting accounts on what happened next but the incident caused two coffee shop patrons to be injured.

Photos posted online show one of the patrons, the young man, clutching the back of his head, which appears to be bleeding.

Mr Soh said the man’s head was injured while the other customer, the elderly woman, had arm injuries.

Many customers ran from the scene when the incident happened but some tried to help the injured patrons, reported Chinese-language paper Shin Min Daily News.

One of them was medical doctor Lee Shi Zhong who bandaged the man's wound. He said the man's head had a 3cm-long injury.

Dr Lee said that the elderly woman’s arm was bleeding too but her injury appeared to be superficial.

Mr Soh said he was in contact with the coffee shop's insurance company and the two patrons to try to help the latter.