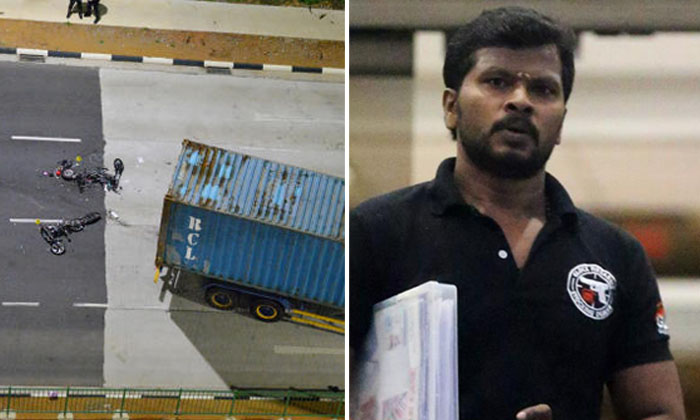 A prime mover driver, who started work at around 7.20am and was still behind the wheel about 17 hours later, was driving along West Coast Highway when his vehicle ploughed into three cyclists, killing two of them.

Their friend, Mr Marcus Loke Teck Soon, now 19, suffered injuries including a superficial abrasion on his left leg and a bruise on his lower back.

On Thursday (Dec 13), the driver, Sahadevan Senguttuvan, 36, was sentenced to 12 weeks' jail and disqualified from driving all classes of vehicles for five years.

He pleaded guilty to two counts of causing the deaths by negligent driving. He also admitted to one count of causing hurt by driving in a negligent manner.

Deputy Public Prosecutor Ho Lian-Yi said Sahadevan, who worked for logistics firm Rong De Distribution, took three meal breaks on the day of the accident, each lasting up to 30 minutes. He also had an hour's rest between 9pm and 10pm.

Mr Loke and his friends were riding their power-assisted bicycles in a single file on the leftmost lane along West Coast Highway towards Telok Blangah shortly before midnight when Sahadevan's vehicle approached them from behind.

DPP Ho said Mr Loke was leading his group followed by Mr Ong. Mr Ang was riding behind the pair, the court heard.

Sahadevan, who failed to keep a proper lookout, did not notice the trio and his vehicle hit Mr Ang first.

Mr Loke then turned around and told Mr Ong to speed up as he saw the vehicle heading towards them.

Sahadevan swerved to the right to try avoid a collision with the pair, but a trailer that he was transporting hit the two cyclists as he was doing so. He stopped his vehicle and called for an ambulance.

The court heard that he died of head injuries.

His friends were taken to the National University Hospital where Mr Ong died of multiple injuries at 1.05am. Mr Loke was given eight days of hospitalisation leave.

For each count of causing death by negligent driving, Sahadevan could have been jailed for up to two years and fined.