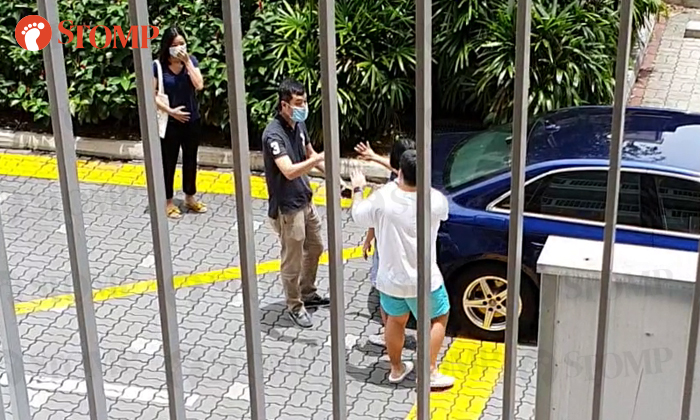 A heated quarrel broke out between two couples in Clementi on Wednesday afternoon (Mar 9).

Stomper Anonymous witnessed the incident at Block 445 Clementi Avenue 3 at around 1pm and took a video.

The Stomper recounted: "Two couples came out of their respective cars to quarrel. This was right in front of the entrance of the multi-storey carpark with both cars parked by the side, resulting in motorists having to overtake both cars to navigate past.

"It was a fairly long and heated quarrel between the two men, and it was so loud that many people around stopped to wonder what was going on.

"One of the ladies can be heard apologising profusely to the other party, but an amicable settlement was nowhere to be found.

"Both parties never came to an agreement but both sides eventually backed off after a long quarrel.

"Frankly I have no idea what the dispute was about, but I gathered from the quarrel that it involved the wife of one of the parties, who could have offended (or been offended by) the other party."

Anonymous appealed for people to be nicer to one another, especially with all that is going on in the world.

He added: "Things have been tough in recent years, due to the ongoing Covid-19 pandemic.

"I sincerely hope that people will learn to give and take both in person and when on the roads, and be a little more compassionate towards others during this difficult time."

Related Stories
Van driver challenges man and poses for photos after blocking cars at AMK carpark
Merc driver unleashes string of profanities on deliveryman, but there's more to the story
Man rages at BMW driver who allegedly pointed middle finger and almost knocked him down: 'Sorry no cure!'
More About:
argument
dispute