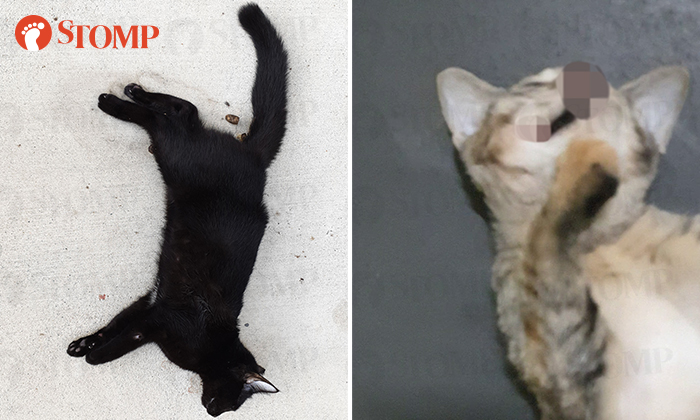 The Animal & Veterinary Service (AVS) are looking into two cases where two cats were found dead in less than 2 weeks at Block 3 Telok Blangah Crescent.

Stomper J contributed a video and photos of the two cats.

Stomp will not be publishing the video due to its graphic nature.

J told Stomp: "I've lived here for more than 20 years and started noticing these 2 cats about seven to eight months ago.

"I saw the black cat at about 4.40pm on Jan 9. The body was hard when I touched it. There was also dried blood on the floor and on its mouth.

"Both of these cats were found dead at the same staircase in the same block, just about three metres apart.

"I've never named the cats but I do sometimes play with the black one. The other cat usually runs away."

Responding to a Stomp query, AVS Group Director Ms Jessica Kwok said: "The AVS, a cluster of the National Parks Board (NParks), takes all feedback received from the public on animal cruelty seriously and will look into the cases reported.

"We received feedback about two cat deaths at Telok Blangah Crescent and are looking into the cases.

"Members of the public who have information on this case (e.g. witnesses, other photographic and/or video-graphic evidence, etc) can contact AVS via our website at www.avs.gov.sg/feedback or call us at 1800-476-1600.

"Information shared with AVS will be kept strictly confidential.

"While investigation is ongoing, we will appreciate if the public refrain from speculation as to the cause of the deaths."

Related Stories
Woman explains why missing hamsters were in corridor, but netizens don't want them in her hands
Woman concerned after seeing monkey roaming about in Tanah Merah MRT Station
Dog barks frantically after being left in BMW at Raffles City carpark
More About:
animals
cats
dead