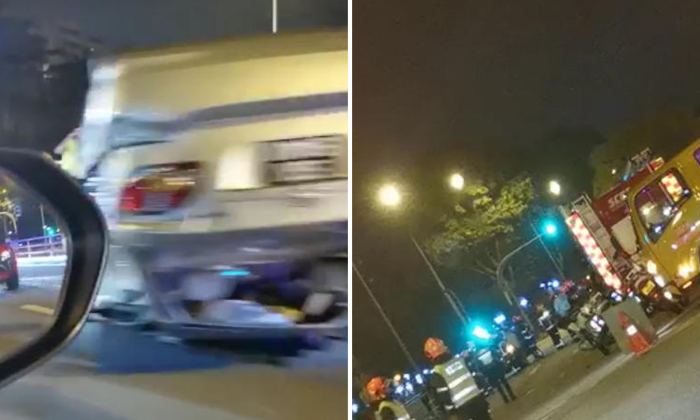 An accident involving a car and a taxi on Monday (March 25) led to the arrest of two men after they were reportedly seen with a knife and a 20-months-old baby.

In response to a Stomp query, the police said they were alerted to the collision along Choa Chu Kang Drive towards Teck Whye Lane at 12.25am.

Two passengers from the car, aged 21 and 47, were conscious when conveyed to Ng Teng Fong General Hospital.

Both men were subsequently arrested in relation to the case.

A 20-months-old boy was also conscious when taken to KK Women's and Children's Hospital.

Mr Pan Junhao, a private-hire vehicle driver, told Lianhe Wanbao that he was passing by the scene when he happened to see a silver car overturn.

The 37-year-old eyewitness said that the first time he drove past the accident site, he noticed a bespectacled man crawling out of the silver car.

When he came by again five minutes later, the area had been cordoned off by the police.

Another witness, who declined to be named, said he spotted three men crawling out of the overturned car. One of them was reportedly carrying a child.

According to the witness, one of the men also threw a knife out of the car, though it is unclear why.

Wanbao, who called the incident 'a case within a case', reported that the car driver fled the scene after crawling out of the vehicle and disappeared.