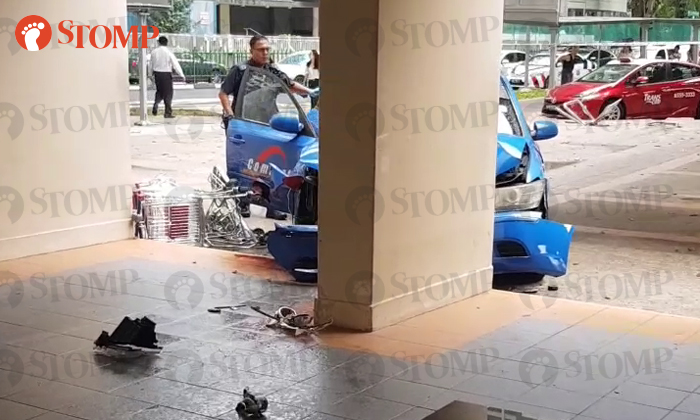 A ComfortDelGro taxi driver who got into an accident with a TransCab driver in Toa Payoh on Monday (Apr 1) had allegedly stepped on his accelerator by mistake.

It was earlier reported by Stomp that the incident occurred at a taxi stand along Toa Payoh Central at around 12pm.

Photos and videos contributed by several Stompers show how the ComfortDelGro taxi was seen at the foot of Block 175 with its front bumper mangled.

A signpost and several supermarket trolleys were also damaged in the accident.

The 62-year-old ComfortDelGro cabby was conscious when taken to Tan Tock Seng Hospital.

Ms Tammy Tan, ComfortDelGro's group chief corporate communications officer, told Stomp in a statement on Monday that there were no passengers on board the taxi and no members of the public were injured as a result of the incident.

An eyewitness told Lianhe Wanbao that he had been on his way to Toa Payoh MRT station when he heard a loud crash.

Mr Wang, a 69-year-old retiree, said: "I was on the walkway next to the taxi stand when a ComfortDelGro taxi surged forward.

"It hit a cab in front, went up the walkway where some supermarket trolleys were parked, and only came to a stop when it crashed into a pillar at the block."

Members of the public were left frightened and the scene was a mess, added Mr Wang.

According to other passers-by at the scene, the ComfortDelGro driver then exited his vehicle and said he had accidentally stepped on the accelerator.

Related Stories
ComfortDelGro driver, 62, taken to hospital after accident with another cab at Toa Payoh taxi stand
Yesterday it was a cab, today it’s BMW that crashes into HDB block -- this time at Bukit Batok
Video: Cabby hits 3 vehicles in Bedok carpark during 'rampage', arrested and suspended
More About:
accident
taxi
cabby