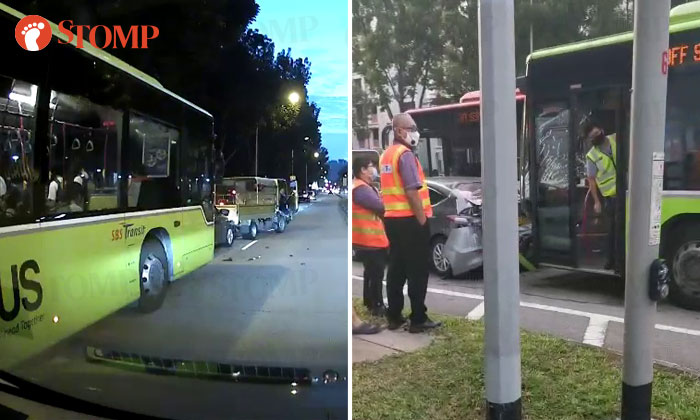 A 37-year-old woman and her seven-year-old daughter were taken to hospital after an accident involving a bus, three cars and a lorry along Compassvale Drive towards Rivervale Lane on Monday morning (Jan 25).

Stompers Wilson and Watson alerted Stomp to the incident and shared photos and videos, including footage of an SBS Transit bus ramming into the rear of a car and causing a chain collision.

Another video shows several passers-by surrounding the scene. The front windscreen of the bus is shattered.

In response to a Stomp query, the police said they were alerted to the accident at 6.58am.

"Two female bus passengers, aged seven and 37, were conscious when conveyed to the hospitals," a police spokesman said.

Ms Tammy Tan, SBS Transit's senior vice-president of corporate communication said to Stomp in a statement: "Our foremost priority has been on the well-being of our commuters.

"A lady commuter and her child were injured and conveyed to hospital where they received outpatient treatment.

"We are in touch with the mother and are rendering assistance to them as best we can.

"We apologise to affected commuters and motorists for the distress and inconvenience caused.