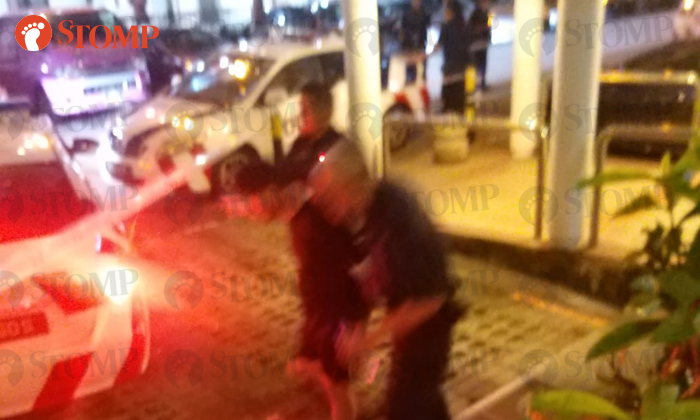 A fight between two men at Block 101 Hougang Avenue 1 on Sunday night (Feb 2) was reportedly sparked off by a love triangle involving a woman.

Stomp previously reported that police were alerted to the case of voluntarily causing hurt by dangerous weapon occurred at 8.41pm.

Two men, aged 26 and 42, were nabbed. The younger man was subsequently taken to Sengkang General Hospital in a conscious state.

The trio had met up for a 'showdown', but turned bloody when the two men got into an altercation.

The older man, who is of a bigger build, had brought along a kitchen knife while the other man had a blade with him.

Mr Zhang, 71, recounted seeing the trio in an argument.

He told Shin Min: "The two men were quarrelling while walking towards the carpark when one of them took out a kitchen knife from behind and brandished it at the other guy."

The younger man fell to the ground. He then got up, kicked his opponent, but fell down again.

He suffered injuries on his ear, shoulder and leg.

Meanwhile, the woman shouted for help and tried to stop the men, but to no avail. She was seen crying when police arrived at the scene and made the arrests.

The incident left a 500m blood trail from the carpark to the park connector.

Related Stories
Knife allegedly used in fight over woman in Hougang, 2 men arrested
Naked man attacked by jealous BF: Two-timing woman shares how it all started with sex video
Woman smashed bottle on teen's head after suspecting her of having affair with hubby, tried to stab her
More About:
fight
dispute
violent
injured
affair