2 arrested, drugs worth $410,000 seized and weapons confiscated during drug bust 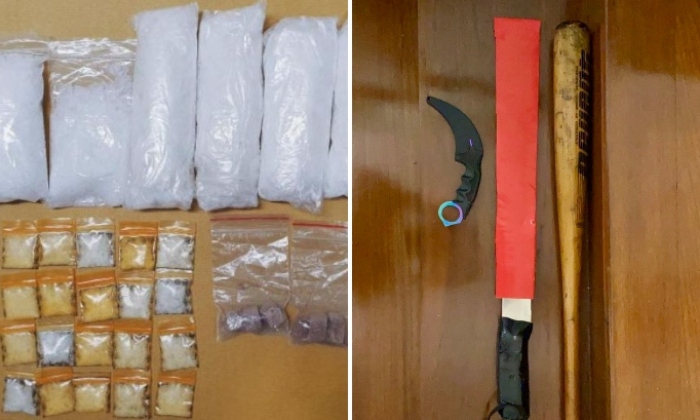 A bust on Thursday (Sept 3) saw drugs worth about $410,000 seized, and the recovery of weapons like knives and a baseball bat.

The authorities also found $15,830 in cash in the residential unit in Geylang Lorong 27.

In a statement on Friday, the Central Narcotics Bureau (CNB) said that together with the Singapore Police Force, its officers arrested two Singaporean men, aged 28 and 43, for suspected drug activities.

The officers had to force their way into the unit after their orders to be let in were not heeded.

"As officers moved in to arrest the two males, both put up a violent struggle and necessary force was used to subdue them," said the CNB.

About 1,302g of methamphetamine, also known as Ice, 56g of heroin, 1,000 Erimin-5 tablets and seven Ecstasy tablets were found in the home, along with numerous drug paraphernalia.

Officers also confiscated weapons, including a parang, a baseball bat and a "karambit" knife, which is shaped like a claw.

Both men are being investigated for drug activities, and for possessing offensive weapons.

The CNB said the total amount of Ice seized in the operation is sufficient to feed the addiction of about 744 abusers for a week.