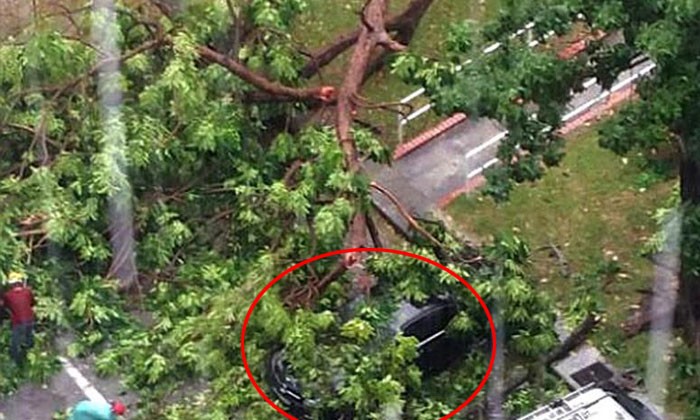 A man was sitting in his Mercedes-Benz yesterday waiting to pick up his baby boy when a tree fell on the car.

It hit the roof of the vehicle, just above the man's head, but did not cause the frame to cave in.

The 34-year-old, who wanted to be identified only as Mr Tan, told The New Paper he was there to get his 10-month-old son from his parents' home at around 3.15pm at Block 125, Tampines Street 11.

Mr Tan, who said it was raining heavily at that time, saw his mother carrying the infant towards the sheltered walkway and was about to move when the tree fell.

He stayed inside as he did not know if trying to get out would cause more damage.

The tree shattered the seven-year-old car's windscreen and damaged the side mirrors.

There was also a dent on the right passenger door.

Mr Tan said: "There were a lot of large red ants that were entering my car through the shattered windscreen."

He called the police from inside his car and waited for them.

A Singapore Civil Defence Force spokesman said contractors helped lift the tree off by using a crane and its officers helped the driver out of his car.

His older sister came to check on him and he assured her and his family that he was all right.

It was 10 minutes before Mr Tan managed to get out of the car.

"My mother was waiting for me with my son at the void deck. She was relieved to see me after I got out of the car," he said.

A Tampines Town Council spokesman told TNP the tree that fell was a khaya senegalensis, a medium-sized tree commonly planted along roads.

She said: "Our officers were on site to assist the driver.

"We are relieved that no one was hurt and are staying in touch with the car owner to render as much help as we can."