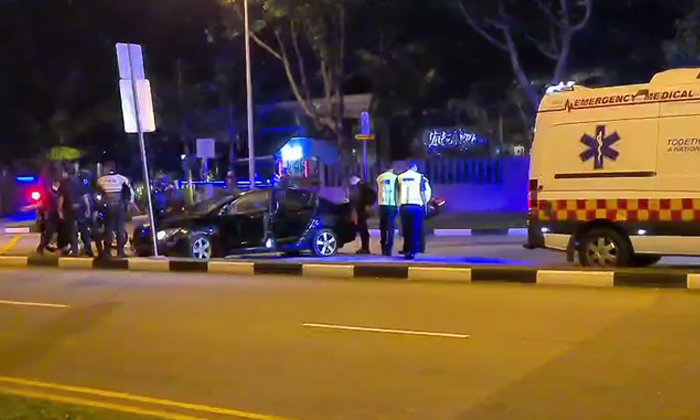 An 18-year-old man who allegedly went on a joyride was arrested for multiple offences following a police chase in the wee hours of Thursday (Jan 14).

The Traffic Police were patrolling along Tampines Expressway (TPE) towards the Pan-Island Expressway (PIE) at 3.29am when they spotted a driver who was speeding, a police spokesman told Stomp in response to queries.

The officers signalled for the driver to stop his car along the roadside to conduct a check, but he sped off instead.

"The officers then gave chase and the pursuit came to a halt when the car mounted a kerb along Edgefield Plains before colliding into a U-turn sign," said the police.

The 18-year-old driver was arrested for dangerous driving, driving without a valid driving license and other traffic-related offences.

Facebook user R Kapil Thevan Peter, who shared videos of the scene, said he heard "loud sirens and a bang".

According to Peter, he heard that the suspect had "picked up his friends for a joyride," only to encounter a road block on the way home.

"The car managed to execute a zebra crossing turn properly but the vehicle lost control and went over the other road," added Peter.