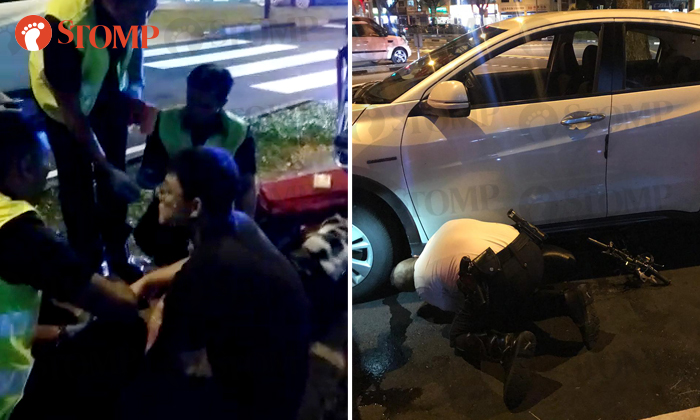 A 17-year-old teenager was taken to hospital after an accident involving his personal mobility device (PMD) and a car at the junction of Sembawang Road and Yishun Avenue 3 on Monday (May 20).

Stomper Kohji, who alerted Stomp to the incident, said that the car had hit the PMD rider.

He added: "The rider and his PMD were stuck under the car, but he was pulled out and sent to hospital."

Responding to queries by Stomp, the police and Singapore Civil Defence Force (SCDF) said they were alerted to the accident in front of Block 715 Yishun Street 71 at around 7.50pm.

The PMD rider was conscious when taken to Khoo Teck Puat Hospital.

Photos and a video contributed by Kohji show the PMD wedged underneath the car.

Paramedics can be seen attending to the teenager, who was sitting on the pavement.