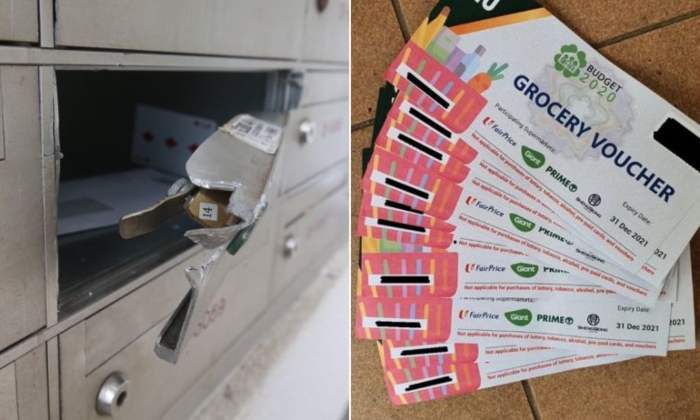 Seventeen more people have been arrested over their suspected involvement in the theft, misappropriation or disposal of Budget 2020 grocery vouchers.

Preliminary investigations indicate that the cases are likely to be unrelated and opportunistic in nature, said the police late on Friday night (Oct 16).

Eight men and six women aged between 16 and 67 were among those arrested for allegedly stealing the Budget 2020 grocery vouchers from letterboxes at Housing Board blocks islandwide.

Three teenagers - a male aged 17 and two females aged 16 and 18 - are among those arrested for the alleged theft of the vouchers and will be charged in court on Saturday.

A 28-year-old woman was also arrested for suspected involvement in assisting with the disposal of stolen vouchers. Investigations are ongoing.

The final two suspects in late Friday's statement are a 70-year-old man and a 26-year-old woman, who are separately being investigated for dishonestly misappropriating the vouchers at residential blocks in Choa Chu Kang.

The arrests are the latest related to stolen grocery vouchers.

The pair were arrested on Wednesday for allegedly stealing Budget vouchers from HDB letterboxes.

They had allegedly worked together some time between 8pm on Oct 6 and 3.30am on Oct 7 to pry open letterboxes at Block 872 Tampines Street 86.

They are accused of stealing 15 grocery vouchers valued at $10 each from the letterboxes of two victims.

Miqheul is said to have stolen vouchers at the same location on a separate occasion, and was charged with an additional count of theft.

Police had earlier also said they had arrested five others - three men and two women - over their suspected involvement in the theft of grocery vouchers at other locations across Singapore. Police investigations into these cases are ongoing.

Those found guilty of theft can be jailed for up to three years, fined or both.

Members of the public who are eligible for the Budget 2020 Grocery Vouchers are advised to collect them from their letterbox as soon as possible, and to keep their letterbox secured at all times.

[POLICE ADVISORY ON THEFT OF BUDGET 2020 GROCERY VOUCHERS FROM LETTERBOXES] The Police have arrested a 37-year-old...