17 dogs and 8,520 vape pods found smuggled in lorry from Malaysia 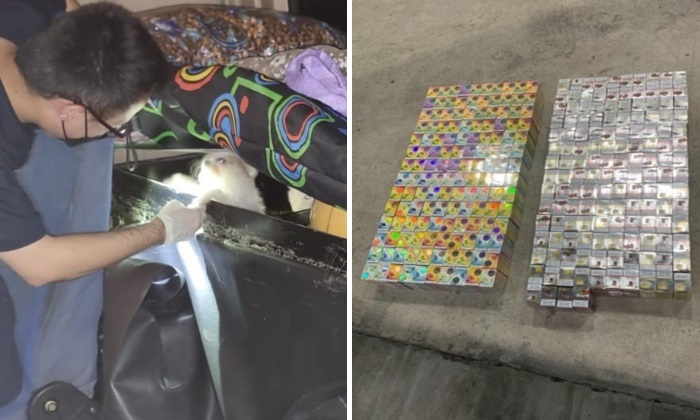 An attempt to smuggle 17 dogs in a Malaysian-registered lorry was foiled by Immigration and Checkpoints Authority (ICA) officers on Monday (May 9).

A total of 8,520 e-vaporiser refill pods and 20 bottles of Binozyt, an antibiotic, were also found in the lorry.

In a Facebook post on Thursday, ICA said the case was detected when the lorry was directed for further checks at Tuas Checkpoint.

During the checks, ICA officers found 17 dogs underneath a makeshift bed and inside the overhead compartment of the vehicle's cabin.The chemical contraband items were also found under the bed.

After the discovery, ICA referred the Malaysian lorry driver and his attendant to the National Parks Board (NParks) and Health Sciences Authority (HSA) for further investigations. The dogs will be quarantined at NParks' Animal Quarantine Centre to be cared for and monitored for any illnesses.

ICA added that the dogs would not be available for rehoming as investigations are ongoing.

The authority also reminded the public that the import of all animals requires approval from NParks. This is because animals smuggled into Singapore are from unknown sources.

As the health status of these animals is unknown, they may unwittingly introduce exotic diseases into the country. The well-being of these animals would also be affected by poor conditions during the smuggling process.

In December 2018, an ICA officer conducted a check on a Singaporean-registered car and found 12 puppies sedated and crammed in its spare tyre compartment. Three of the puppies eventually died from the smuggling process.