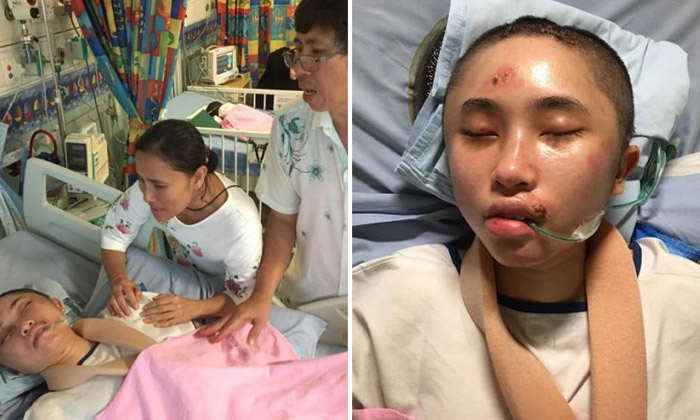 When he last spoke to his daughter, she asked him for advice about what she should buy for the residents of an old folks' home she would be visiting here.

Soon after that conversation, she was hit by a car while making her way to see the old folks. Now, she is fighting for her life.

"I never expected this to happen to my little girl," Mr Jattanathammajit told The New Paper on Sunday through a translator yesterday afternoon at KK Women's and Children's Hospital.

The accident happened on Sept 18 just before 7am as his daughter, Aroonrak Jattanathammajit, was leaving her hostel on Balestier Road for school to join an activity involving elderly folks.

A car reportedly hit her as she was crossing the road to get to a bus stop.

Aroonrak's roommate, fellow Thai student Kotchamon Techathanakitlert, said she was alerted to the accident when she left the hostel shortly after her friend did.

A man who recognised her uniform informed her of the accident.

"He wrote down her name when he saw her name tag, so when he saw me, he asked me if I knew her and I told him that I did," she says. "I immediately asked him to take me to the accident (scene)."

When she got there, Kotchamon said she knew the accident had been a serious one even though her friend had already been taken to the hospital in an ambulance.

"Her spectacles and umbrella were together but her both her shoes were separated - one in the middle of the road and the other was on the sidewalk," she says.

A Singapore Civil Defence Force spokesman said they received a call at about 6.50am about an incident involving a female teenager on Balestier Road, adding that she was taken to KKH in a drowsy state.

Police confirmed the incident and said that investigations are ongoing.

Mr Jattanathammajit, who lives in Trang in southern Thailand, says he found out about the accident from the mother of his daughter's roommate.

"My wife and I got on the next flight to Singapore," he said. "I rushed straight from the airport to her bedside. We've been here ever since."

Aroonrak, whom her roommate describes as one of the top students in their school, has since undergone brain surgery twice. She has also come out of a coma.

"Doctors said her chances were 50/50," says her father. "They said that if she showed any sign of movement within the first seven days, then there's hope."

Aroonrak spent 10 days in the Intensive Care Unit, then a day in the High Dependency Ward before being moved to a normal ward.

"She moved her eyes once and twitched her fingers on Sept 30," says Mr Jattanathammajit, who has not left the hospital since he arrived.

He explains that he is struggling to sustain his rubber retail business in Thailand, and he did not want to "waste money on accommodation".

He leaves his daughter's side only when he goes to use the common shower facility.

He says he is $80,000 in debt because he wanted to send his daughter to a school in Singapore to get "an education from one of the best education systems in Asia" and because he knew that "Singapore is a safe place".

"I just wanted her to have the best education possible. I wanted her to be better off," adds Mr Jattanathammajit, who pays close to $50,000 annually in expenses for his daughter.

He has raked up a hospital bill of close to $60,000 so far. Mr Jattanathammajit says he is focused on his daughter's recovery.

"I pray and hope every single day that she will get better," he says. "She's my only daughter, I can't lose her."