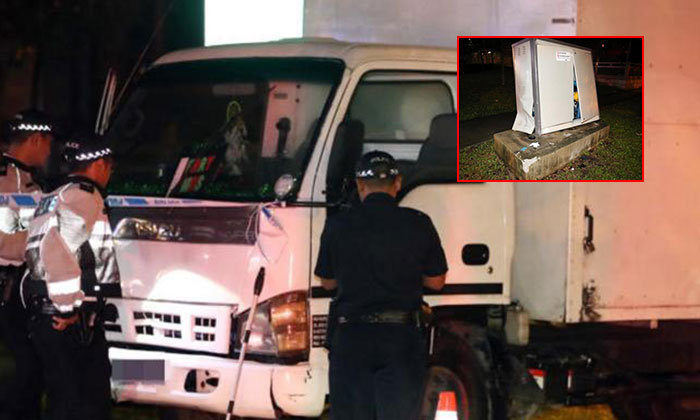 A 16-year-old boy was arrested after hijacking a lorry, causing several collisions as he drove it around Jalan Kayu.

The teenager was suspected to have driven the rented lorry without permission, hitting a gas regulator box, striking the road divider as he reversed the vehicle, before charging up a grass patch, nearly crashing into a coffee shop.

The teenager was the only one injured in the accident, the police told The Straits Times.

The police added that the teenager did not have a valid driving licence, and has been arrested for driving a vehicle without the owner’s consent.

A spokesman from the Singapore Civil Defence Force (SCDF) said that the teenager was conveyed conscious to Khoo Teck Puat Hospital for treatment following the incident.

A witness, Mr Huang, 66, said that he was having his dinner at the coffee shop when he heard a loud bang.

"The lorry hit the box, then reversed and hit the divider before rushing onto the grass. It all happened very quickly and was very shocking.”

The collision damaged the gas regulator box, causing it to leak.

The vapours from the box were dispersed by the SCDF using two water jets, and patrons at the coffee shop were evacuated as a precautionary measure.

The box which was damaged was a low-pressure gas regulator box, and there was no gas supply disruption to the surrounding area, confirmed a spokesman from SP (Singapore Power) Group

“Our officers were immediately deployed to the area and our priority was to ensure the safety of everyone in the vicinity.

"As a precautionary measure, gas supply to the box was shut.”

According to Lianhe Wanbao, the accused’s grandmother said that the boy’s parents were divorced, and his father had married another Malaysian woman.

His father and his new wife travel frequently between Malaysia and Singapore and are currently in Malaysia now.

She also revealed that the boy had a turbulent relationship with his father and stepmother.

Although they stayed in the same flat, they rarely talked to one another.

The elderly woman said that on the day of the incident, she had met her grandson at the foot of the block.

He then told her that he was helping a friend to ‘look after the lorry’.

She did not expect him to get into trouble.