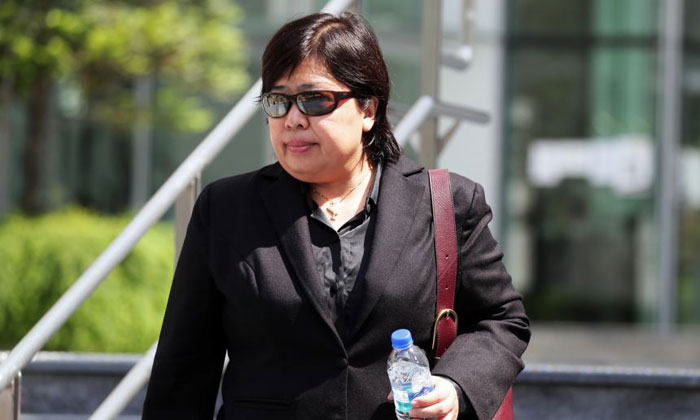 A woman who failed to wear a mask in public places, including the Marina Bay Sands (MBS) integrated resort, on numerous occasions, admitted to her offences in a district court on Monday (Sept 6) and was sentenced to 16 weeks in jail.

Phoon Chiu Yoke, 54, appeared in court via video-link and admitted to six charges under the Covid-19 (Temporary Measures) Act after she repeatedly failed to don a mask in public places.

She also pleaded guilty to three charges under the Infectious Diseases Act, as she had breached a stay-home notice (SHN).

Thirteen other similar charges were considered during sentencing.

The prosecution had asked the judge to sentence Phoon to between 17 and 22 weeks’ jail, stressing that she was a recalcitrant offender.

Among other offences, Phoon had removed her mask outside the State Courts building in May after being charged over similar incidents.

She committed a similar offence again a month later while out on bail.

Her lawyer, Mr Amos Cai from Yuen Law, pleaded for his client to be given a fine and said that she had never contracted Covid-19.

He also said that Phoon had an “exemplary 12-year naval career” and had “championed gender equality in the military”.

The court heard on Monday  that safe distancing ambassadors (SDA) first saw that Phoon had failed to wear a mask at Newton hawker centre at around 7.20pm on May 8 last year.

When approached, she ignored the SDAs and instead, used a scarf to cover her nose.

Phoon later told a National Environment Agency enforcement officer that she did not know what Covid-19 was.

Ten days later, she received a notice of composition for $300 via registered post for failing to don a mask at the eatery.

She failed to pay the amount and was later charged in court over the offence.

She returned here on June 28 last year and was told to serve a 14-day SHN until July 12.

Phoon went to MBS to serve it in a room on the 29th storey and was given a key card that was only for one-time entry.

But at 8.07pm on June 28 last year, she left her room without wearing a mask and went to a lift lobby, claiming that she wanted to view the night scene of the city.

When Phoon realised that she had been locked out, she took a lift down to the first storey, as she wanted her key card reformatted so that she could re-enter her room.

An in-house security officer later spotted Phoon. She was escorted back to her room, which  she re-entered at 8.14pm.

She continued to repeatedly leave her room in the following days and, once, even stated that it was “her right” to utilise the hotel amenities, as she had paid $2,400 for her stay there.

After serving her SHN, Phoon was stopped from entering Clarke Quay Central shopping mall on Dec 2 last year at around 11.30am, as she was not wearing a mask.

She then told an SDA that the latter had “no right”  to ask her to don one. Phoon also claimed that she was “an army commander and once drove a tank”.

Phoon stormed off after she was told that the police would be alerted, and returned soon after with a mask on.

However, she pulled it down when she was at the atrium of the mall, and was later escorted out.

On March 28 this year, an unmasked Phoon was stopped at the entrance of St Andrew’s Cathedral and its staff members reminded her to put one on.

She did not comply and continued to be unmasked throughout the church service at the worship hall.

After the service, Phoon was approached by a service coordinator, who cautioned her against not wearing a mask. She ignored him and left the worship hall.

Phoon refused to wear a mask even after the church’s vicar advised her cooperate, the court heard.

She was later captured on video not wearing a mask at MBS on May 15 this year.

The clip, which later went viral, showed her telling SDAs: “Who are you? Who are you representing? Where is your badge? Show me your badge.”

Phoon finally left MBS without wearing a mask at 2.11pm that day.

She was hauled to court later that month and was handed five charges under the Covid-19 (Temporary Measures) Act.

After the proceedings, Phoon walked out of the State Courts building, deliberately removed her mask in front of members of the media and smiled.

On June 25, Phoon was out on bail when she again failed to wear a mask, this time at the Mandarin Orchard Singapore hotel. A security officer then alerted the police about her antics.

A month later, she was charged over this incident. Her bail of $12,000 was revoked and she was taken into custody.

On Monday, DPP Jane Lim urged Judge Tan to sentence Phoon to between 17 and 22 weeks’ jail, stressing that she is a recalcitrant offender.

The DPP added: “Her blatant disregard for the law and selfish behaviour is antithetical to the serious nature and consequences of the Covid-19 pandemic and calls for a strongly deterrent sentence.”

Pleading for a fine, Mr Cai said on Monday that Phoon had joined the Republic of Singapore Navy in 1990 and was “one of the pioneer female naval commanding officers”.

He added that the Singaporean completed her command before retiring with the rank of major in 2002.