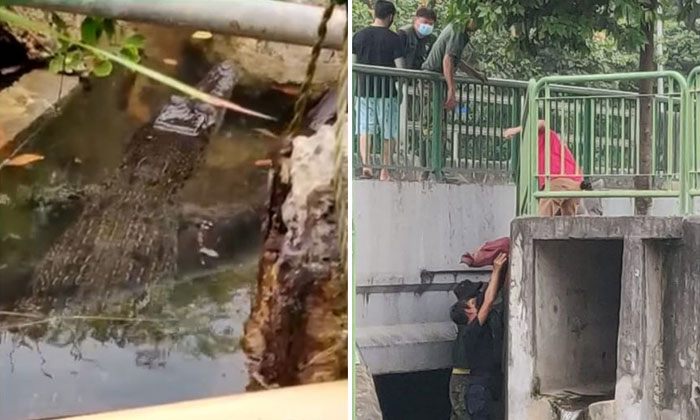 A 1.53m-long crocodile spotted by anglers at East Coast Park on Tuesday (Oct 5) has been caught and relocated to the Sungei Buloh Wetland Reserve.

It was filmed swimming in a canal near Fort Road. The clip was shared on Facebook group Singapore Wildlife Sightings and has gained more than 1,000 responses.

In response to queries from The Straits Times, Dr Adrian Loo, group director of wildlife management at the National Parks Board (NParks) said NParks staff, volunteers and contractors found the juvenile crocodile after receiving reports on it.

He said: “The crocodile was removed and relocated to the core area of Sungei Buloh Wetland Reserve for the safety of the public."

The core area of the wetland reserve is not accessible to the public and comprises about 150ha of wetland habitats, including mangroves and mudflats.

Estuarine crocodiles are found naturally in the wild in Singapore, said Dr Loo. These reptiles feed and rest in brackish and freshwater areas, and are usually found in the water or on mudflats away from visitor routes, he added.

“They are able to swim in both fresh and salt water so (they) have sometimes been found in other places across the island.”

As apex predators, these creatures indicate that an area has a rich biodiversity that can sustain them, added the 34-year-old author of the book Beast, Guardian, Island: The Saltwater Crocodile In Singapore. She noted that the earliest records of estuarine crocodiles in Singapore date back to the 1800s.

Mr Law Ing Sind, co-founder of the Herpetological Society of Singapore, which studies reptiles and amphibians, said sightings of the creatures outside of Sungei Buloh are usually sporadic but have been confirmed in Changi, Pasir Ris and Sembawang.

These are likely to be displaced individuals that do not stay long in the area, he added.

Mr Law said: "Saltwater crocodiles are usually restricted to Sungei Buloh where there are large tracts of mangrove forest, which provide a large prey base in the form of fishes to sustain a resident population."

A crocodile of the size in the video would indicate that it is a juvenile and that the population in Singapore is most likely breeding and reproducing here, he added.

"This is actually good news, as this species is regarded as critically endangered locally."

It is not the first time that the authorities have captured a crocodile.

On Feb 23, 2019, NParks and national water agency PUB caught a 1.7m-long crocodile in Lower Seletar Reservoir and relocated it into the wild, days after water and fishing activities there were suspended after the animal was sighted in the water.

In 2017, warning signs were put at Changi Beach Park after a reported sighting of a crocodile in the area. 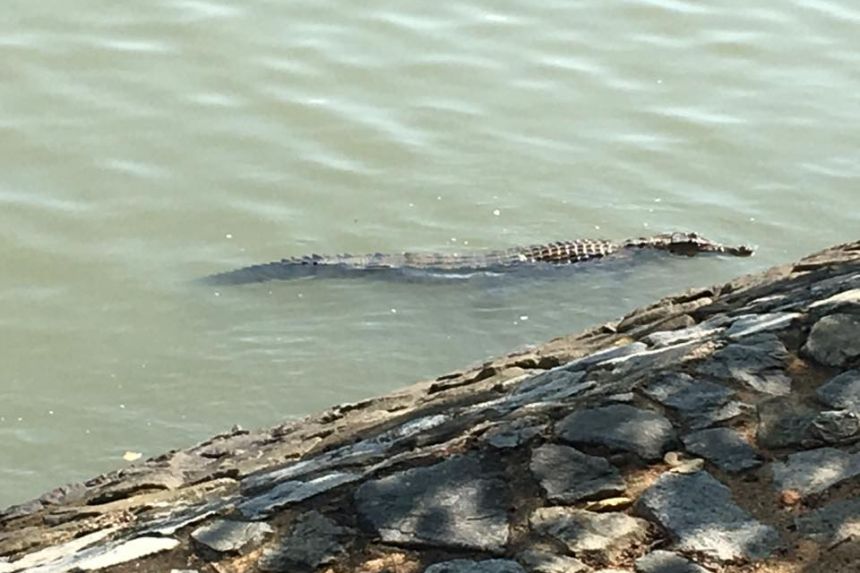 That same year, a crocodile was also spotted at a construction area next to the National Sailing Centre at East Coast Park, causing the centre to suspend all its water activities.

NParks says on its website that members of the public are advised to stay calm and back away when they encounter a crocodile.

They are encouraged not to approach, provoke or feed the animal.

Said Ms Pocklington: "People shouldn't be scared because, like any animal, they are fine if members of the public leave them alone."

The public may also contact NParks on 1800-471-7300 to report any crocodile encounters.