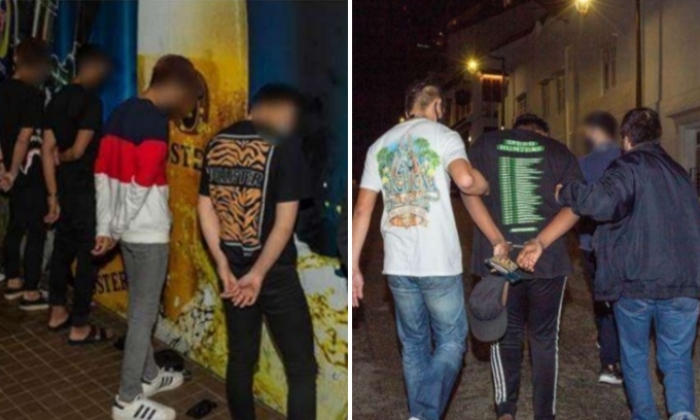 A total of 151 men were arrested for being suspected members of unlawful societies in a two-week island-wide operation from Dec 21 to Sunday (Jan 3).

The operation was conducted by officers from the Criminal Investigation Department and the seven Police Land Divisions.

The police said in a statement that proactive checks were conducted at various congregation hotspots, including F&B outlets and shopping malls, to keep gang activities in check.

The police added that they will continue to monitor the situation and conduct targeted enforcement operations to suppress gang activities that threaten public safety.

Anyone found guilty of being members of an unlawful society under the Societies Act shall be liable on conviction to a fine not exceeding $5,000 or to imprisonment for a term not exceeding three years, or both.

"We have zero tolerance towards secret society activities and will not hesitate to take strong actions, including invoking the Criminal Law (Temporary Provisions) Act that provides for detention without trial, against anyone involved in secret society and criminal activities that threatens the public safety, peace and good order," said the police.

Members of the public are also advised to steer clear of secret society activities and to report those engaging in such unlawful activities to the police immediately.

Related Stories
75 men, aged 16 to 54, arrested for being suspected members of unlawful societies
Man allowed over 10 pax at dad's funeral wake where gang slogans were shouted, masks not worn
20 arrested for involvement in gang-related activities, including 2 who allegedly recruited members
More About:
police
arrest
gang