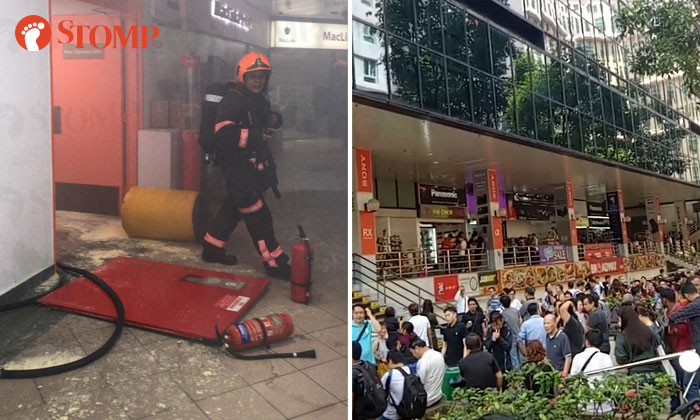 Around 150 people were evacuated from Sim Lim Square after a rubbish bin caught fire on the fifth floor of the building on Monday afternoon (June 17).

Stompers Aloy, Yan Long and Leonard alerted Stomp to the fire and shared photos and videos taken at the scene.

Stomper Eric also shared a video taken as he was evacuating the building.

Aloy, who runs a store at the mall, told Stomp that he received a call from one of his staff that they would need to close shop due to a fire on the fifth floor.

"I checked with the building's management on what was going on and they responded very quickly and efficiently," he said.

At 1.33pm, his staff updated him and said they were able to enter the building again.

In response to a Stomp media query, the Singapore Civil Defence Force (SCDF) said that they responded to the fire at 1 Rochor Canal Road at about 12pm.

"The fire involved the contents of a rubbish bin on level 5 of the building," an SCDF spokesman said.

"The building's sprinkler system was activated and the fire was extinguished by SCDF using a hose reel.

"About 150 persons were evacuated by the company's emergency response team (CERT) prior to SCDF's arrival."