14-year-old girl among 162 suspects arrested during CNB raid, drugs worth over $260k seized 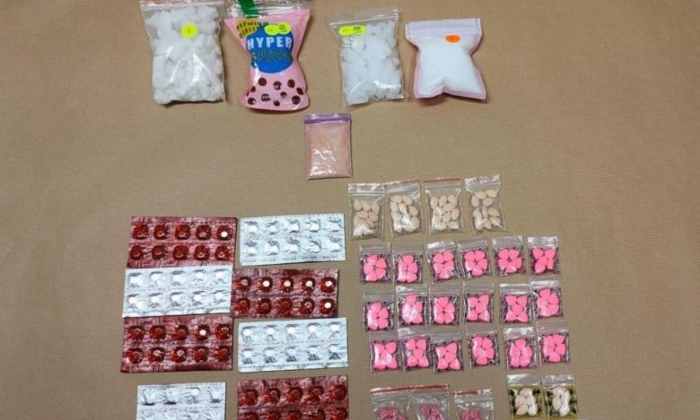 A total of 870g of heroin, 586g of methamphetamine or Ice, 176g of ketamine, 47g of new psychoactive substances, 322 Ecstasy tablets, 203 Erimin-5 tablets and 13 bottles containing GHB (gamma-hydroxybutyrate) were seized. The drugs are worth an estimated $260,500.

No details were given surrounding the arrest of the girl.

One of those arrested was a 35-year-old man who had his 12-year-old son with him in the room, where drugs were displayed openly.

The boy's 36-year-old mother was also arrested during the raid for suspected drug offences.

The boy was placed in the safe custody of a close family member, the CNB said on Friday.

A karambit knife was also recovered from one of the hotel rooms along with various drug paraphernalia.

A raid was also conducted on Sept 14 in Eng Hoon Street that resulted in the arrest of two Singaporeans - a 38-year-old man and a 30-year-old woman.

CNB officers found 10 Ecstasy tablets and a packet containing about 3g of powdered mixture, believed to contain a mix of Ice and Ecstasy on the man.

More drugs were found after the man was taken to his unit nearby, where officers arrested the woman.

Cash amounting to $20,000 and various drug paraphernalia were also recovered from the unit.

Investigations of all suspects are under way.