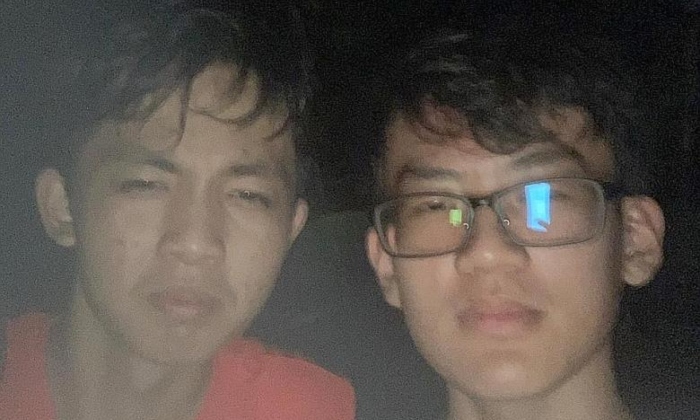 On a whim, two teenagers decided to look for the remnants of a World War II Japanese shrine and ended up lost for several hours in the forest at MacRitchie Reservoir.

When he told his classmate Soo Xiang Lin, also 14, they decided to take a bus to MacRitchie Reservoir to look for it, arriving at the Lornie Road entrance at 3pm on Oct 18.

The boys, who did not inform their parents of their plan, had no food or water because they assumed there would be vending machines there.

Clad in T-shirts, shorts and track shoes, they took the Terentang Trail suggested by Apple Maps until they reached an opening, which they used to enter the forest.

It was 5pm by then. They met a man who was also looking for the shrine, but he soon gave up his search.

The boys pressed on and realised they were lost at 6.45pm when their attempt to follow pieces of orange plastic tied to surrounding trees led them deeper into the forest.

Richard told The New Paper last week: "There was that sense of hopelessness when I realised we were lost."

But Xiang Lin was hopeful they would be rescued. Hungry and thirsty, they called the police for help at 7.15pm.

The call handler told them to download location finder app what3words to pinpoint their exact location. They were also told to stay put and remain calm if they see any animals.

Richard said: "I was scared of wild boars and other animals, and I did not want to get eaten."

Xiang Lin said: "I was more scared of getting scolded by my mother."

When they texted their parents about their plight, it was 8pm and so dark they could not see their hands.

About two hours later, the boys heard people shouting and shouted back in response. Six Gurkha Officers from the Singapore Police Force then appeared.

After checking them for injuries and asking about their ordeal, the officers took the boys to a boat where they were given water to drink. After the boat took them to the main entrance, paramedics treated the minor cuts on their legs.

They later found out the officers were part of a team of about 50 personnel that included the police and SCDF paramedics as well as an unknown number of drones.

The boys were thankful that so many people were activated to find them.

Richard's parents and Xiang Lin's mother were waiting for them at the entrance, and it was almost 11pm when they got home.

Xiang Lin's mother, who wanted to be known only as Madam Lin, 42, a risk management consultant, said: "I was worried about the bad things that would happen based on my imagination. I am happy and thankful to the Singapore Police Force for finding my son."

The police confirmed receiving a call for assistance from two boys at 7.16pm on Oct 18.

Dr Adrian Loo, group director of conservation at National Parks Board, said: "We advise visitors going on a nature discovery walk to don comfortable walking shoes and take along a water bottle.

"For their own safety, visitors to our nature reserves are reminded to stay on designated trails."

He added that there are signs and railings to remind visitors not to stray off designated trails. Anyone caught doing so can be fined up to $2,000.

Hiking expert Hazleen Panayiotou said: "Don't panic if you are lost, stop walking farther. Calm down, think, retrace your steps in your mind and plan your route back before walking - recall landmarks, follow the GPS or compass, get help by whistling or call out for help."

Noting his fear of getting into trouble with his mother, Xiang Lin said: "I will inform my parents before going on such adventures in future."

Related Stories
The curious case of 22-year-old woman found injured and 'covered in leaves' after going missing for 3 days
Man who went missing with toddler son after argument found by police, but has yet to return home
Missing 18-year-old girl returns home after 7 days, had left note: 'I'm not a good child'
More About:
lost
scdf
police
missing